5 top places to see Borneo's wildlife in its natural habitat

When picturing yourself on holiday in Borneo, you’re likely to see yourself face to face the island’s most famous residents, the orangutans - but these intriguing creatures are only one of many fascinating species which inhabit the vast and ancient Borneo rainforests.

The best time to visit Borneo depends on what you want to do there - sunbathing isn't so great during the rainy season - but there are plenty of exciting wildlife-spotting opportunities throughout the year, and the rainy seasons are sporadic, so we advise against putting too much emphasis on the weather when planning your Borneo adventure! Twisting through a narrow corridor of lush greenery in the northern state of Sabah, the Kinabatangan River links many diverse habitats, from humid jungle to limestone caves to mangrove swamps. A small number of wild orangutans still inhabit the tree-lined banks near the river’s upper reaches, and boat safaris like the one on our Essential Sabah itinerary are a fantastic way to get close to the native wildlife with minimal impact. Watching from the boat you will be treated to undisturbed views of pygmy elephants, orangs, proboscis monkeys, gibbons, brilliantly coloured birds and many other creatures as they come to drink and bathe at the water’s edge. 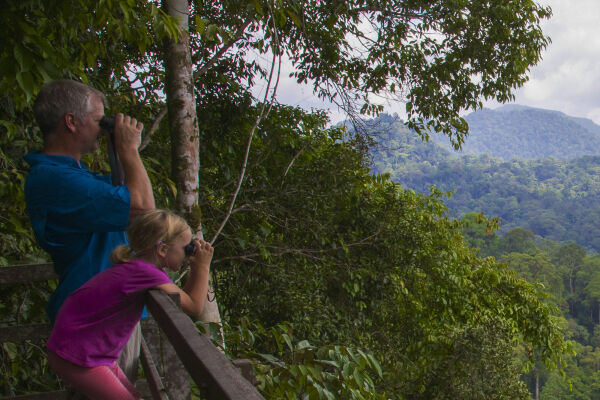 The Danum Valley Conservation Area covers 438 sq km of tropical wilderness in eastern Sabah, and has become a prime location for conservation research initiatives, as well as a fantastic spot for observing orangutans in the wild. The remarkably luxurious Borneo Rainforest Lodge is the area’s best-known accommodation, particularly notable for its specially constructed treetop canopy walks, which offer the chance to see primates, birds, insects and perhaps even deer and wild cats as you stroll between the trees. Though renowned world-wide for its fantastic bird-life, the nearby Tabin Wildlife Reserve is also home to clouded leopards, Bornean elephants and rhinoceros, otters, deer and civets and is well worth devoting a few days to exploring while you’re in the area. 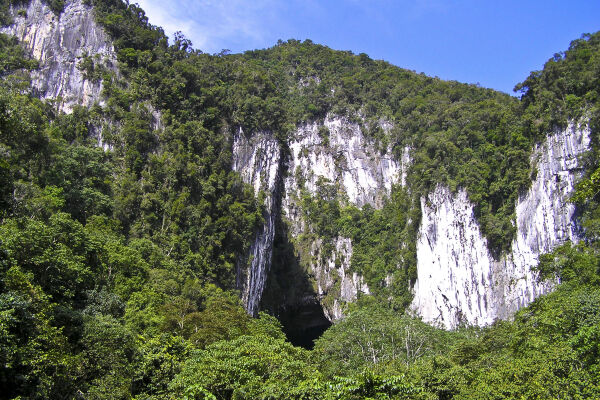 If you're up for a full-on Bat-cave experience, the cave network at Gunung Mulu National Park is fantastic. These subterranean labyrinths include the largest known cave chamber in the world, and are home to literally millions of bats; watching them exit the caves at dusk to hunt for food is a truly remarkable sight. The whole of the Gunung Mulu area has been declared a UNESCO Heritage site, and protects the habitat of many rare species, including the delightfully named squat frog and steam toad (which are only known to exist within the park) and the Malaysian sun bear (the only bear species in South-East Asia), as well as the familiar and fascinating macaques and gibbons. 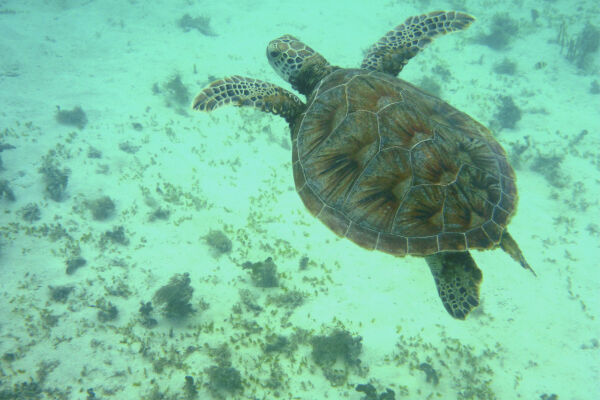 Some of the most vibrant and extraordinary wildlife in Borneo can be found in the warm, clear waters around the coast. Diving and snorkeling are both excellent ways to get close to the remarkable creatures which inhabit the reefs and bays around Borneo’s islands, which happen to be right in the middle of the Sea Turtle Corridor, an international marine conservation zone. Gaya Island is a true tropical paradise, and the Gayana Marine Resort (which specializes in marine conservation education) is an ideal place to combine close encounters with wild sea-life with helping to protect endangered species. As well as watching them in the wild, you can witness turtles being rehabilitated after injury, see babies in the hatcheries, and even get up close to pregnant seahorses (male, naturally!). 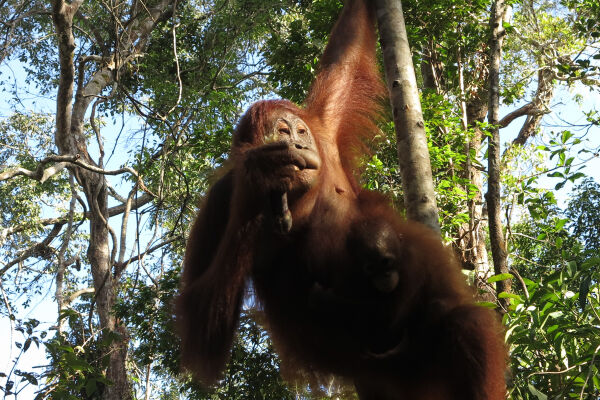 If you’re headed for Kalimantan, the Indonesian part of Borneo, then Tanjung Puting National Park (the world’s foremost orangutan conservation area) is top of our list. A trip down the Sekonyer River aboard a traditional klotok boat might be lighter on the luxury, but the richness of the wildlife (including monitor lizards and crocodiles as well as the birds and primate species) is second to none. Just a little further east is the rugged, deep rainforest surrounding Palangkaraya, which can be explored by boat along the Kayahan river. Best suited to those who would describe themselves as intrepid, a riverboat trip right into the heart of the jungle to spot wild orangutans, and waking each morning to the rainforest dawn chorus, is a truly exceptional experience.

Be inspired by our Borneo destination page, or if you're ready to start planning your tailor-made holiday get in touch with our Destination Specialists.