Those who venture up into Tibet’s almost-mythical landscape are often moved to poetic descriptions. The Roof of the World. The Third Pole. Land of the Gods. Whatever you want to call it, here you can expect to be challenged and amazed at every step.

It’s almost impossible to have a clear-eyed view of Tibet without taking a position on the political situation, though despite the ever-present tension in the background, this is a country that has lost none of its fascination for the visitor.

Tibetans are fiercely protective of their ancient culture and Buddhist religion, which is reflected most obviously in the temples and monasteries dotting the plateau, joyful festivals, and a profound reverence towards the monastic tradition. Beijing may claim sovereignty, but it hasn’t yet managed to sever the bond that many still feel with the exiled Dalai Lama.

Since the worst years following the establishment of the Tibet Autonomous Region and the devastating Cultural Revolution, some freedoms have been restored, the iron grip has been loosened somewhat, and the country is a lot more accessible, except around sensitive anniversaries. Chinese investment and modernisation from the 1980s onwards has turbo-charged cities such as Lhasa and Shigatse, with many significant religious sites including ancient monasteries being renovated and rebuilt in largely sympathetic styles. A huge influx of Han Chinese has dramatically changed the country’s ethnic makeup, and Tibetans have little or no say in governance, but the political situation is at least stable.

So why, then, are we convinced that Tibet should be the next destination you explore? Well, let’s start with those incredible views. This is the world’s highest country after all, with an average elevation of 4,500 metres, and surrounded by some of the tallest mountains on the planet, many of them in Mount Everest National Park. During the spring and autumn months, that epic scenery can be admired with wonderful clarity, and even in winter you’ll be pleasantly surprised by how hospitable the weather can be.

Most tours will begin in the capital, Lhasa, with a few days to acclimatise and discover landmarks such as the beautiful Potala Palace, the Drepung Monastery and the hallowed Jokhang temple. Joining the pilgrims and worshippers on the morning kora around the Jokhang is a rite of passage for many visitors, and an unforgettable experience. Southeast of Lhasa in the fertile Yarlung Valley, the area around Tsetang holds several of Tibet’s most sacred religious sites, including Samye, the first monastery ever built in the country.

In the other direction, Gyantse, one of Tibet’s best-preserved towns, is a five-hour drive west over steep mountain passes, taking in the holy lake of Yamdrok on the way. The magnificent Palcho Monastery here, with its tiered Kumbum, is a work of art. A little further along the Friendship Highway (you’ll be glued to the window throughout the journey), Shigatse is the second-largest city in Tibet, a modern metropolis that’s home to the 15th century Tashilhunpo Monastery, and the Summer Palace of the Panchen Lamas, as well as being the birthplace of Tibetan opera. From Shigatse to Mount Everest National Park, it’s just another day’s drive, while continuing further west brings you to the iconic Mount Kailash, another superb area for trekking.

In Tibet, religious devotion mingles with respect for ancient traditions and proud defiance to create an enthralling culture, and the Himalayan landscape is absolutely spellbinding, even in the freezing depths of winter. Is it any wonder the imagination takes flight?

What to love in Tibet

What to do in Tibet: Discover more with our hand-picked experiences & highlights 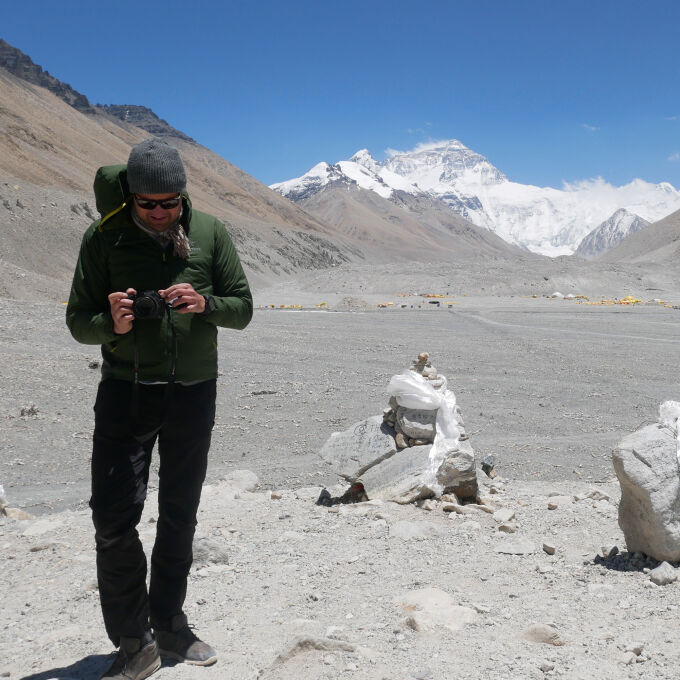 Stand at the foot of Everest in Tibet

As you drive away from Tingri town, you’ll leave the trappings of urban life behind and settle in to a different pace, where time is measured by something more ancient than clocks. The power of the landscape is immediate and intoxicating, reaching a new high every time you catch a glimpse of Mount Everest - Mt. Qomolangma itself - growing closer. 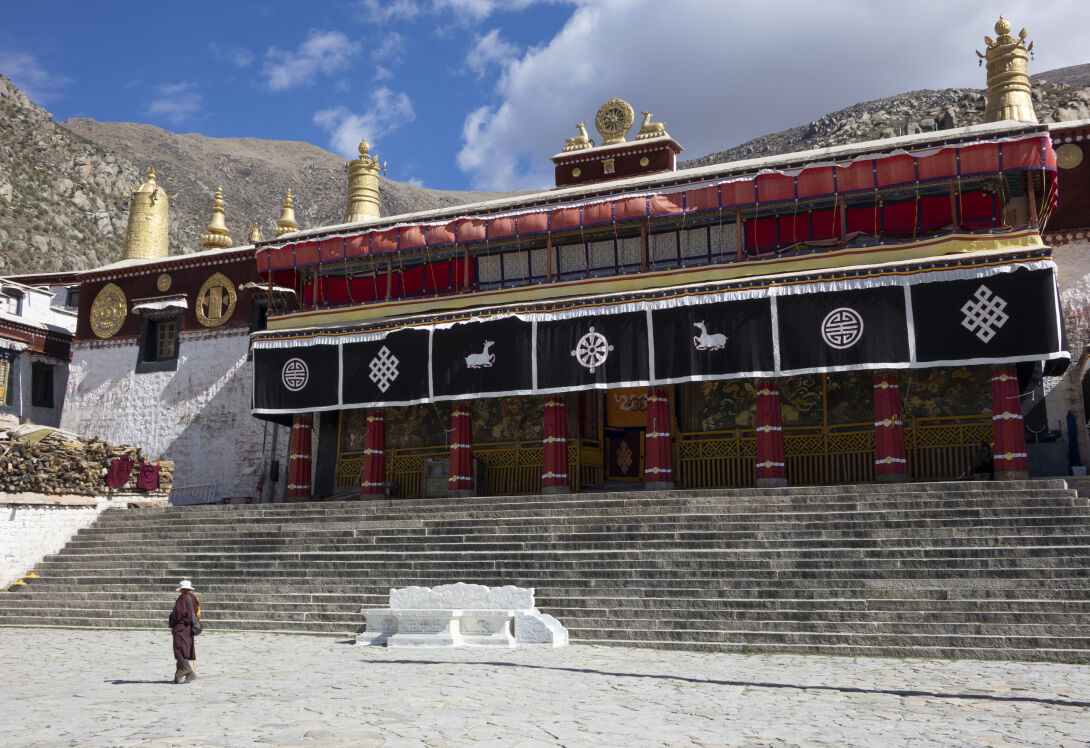 Walk the Kora at Ganden Monastery

Ganden Monastery, meaning ‘joyful’, lives up to its name. Rising, phoenix-like, from crumbling ruins, it has been transformed into a smart collection of buildings sitting proudly against the hillside, with commanding views of the valley below . Following one of the kora trails takes you in the footsteps of generations of pilgrims who have performed this same sacred walking meditation. 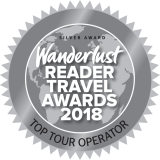 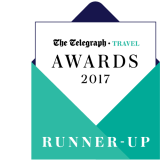 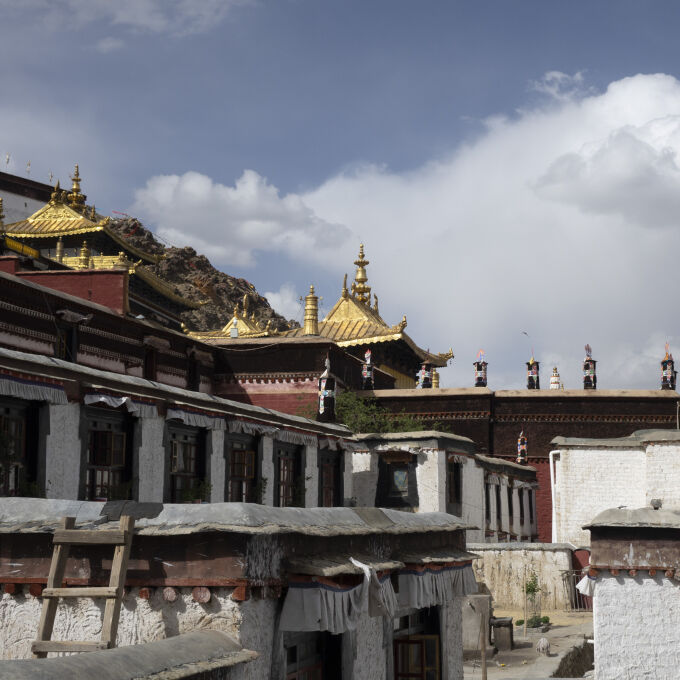 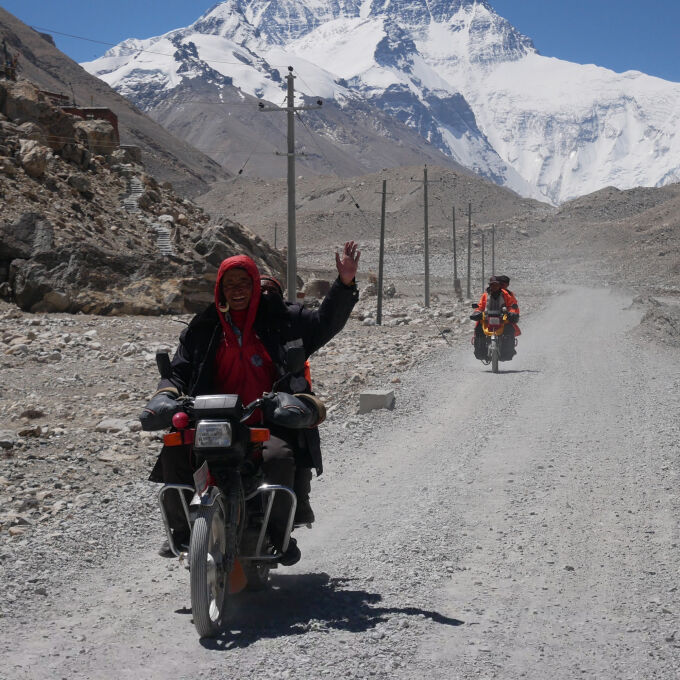 We know your time is precious, before and during your trip. We want you to have a smooth and relaxing experience so that your main concern on holiday will be whether to order noodles or rice. There will be no hidden extras, and your holiday will be orchestrated seamlessly by your Destination Specialist plus our local guides and behind-the-scenes crews in your destination 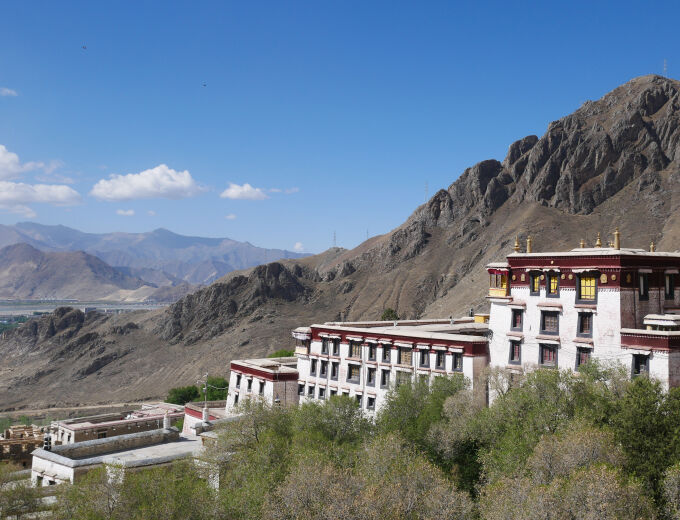 Lhasa is a tale of two cities. The western side of the Tibetan capital - an unappealing urban sprawl of identikit shopping malls and bulky apartment blocks known to some as ‘Little Sichuan’ resembles many modern Chinese cities. But Lhasa’s eastern section is a different story. Here it's far more traditionally, well Tibetan - deeply devout, romantic and mysterious, and positively swirling with charm. Rickety whitewashed houses and lamp-lit temples line the backstreets, their low ceilings a hazard to taller visitors, while ancient pagodas perch elegantly on the hillsides. 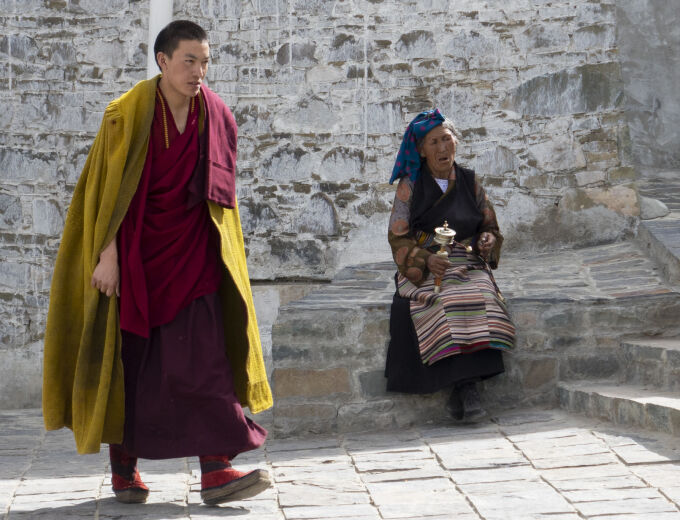 The traditional seat of the Panchen Lama, and base of the Gelugpa Buddhist order, Shigatse is Tibet’s second-largest city, and a dynamic modern metropolis on the Sino-Nepal Friendship Highway. Though profoundly reshaped by commercial development and industry in recent years, Shigatse is also an important centre of Tibetan history and culture, still threaded with a few seams of authenticity that combine with an appealing frontier spirit. Most visitors will not stay for long however, in the knowledge that Mount Everest is just another day’s drive away. 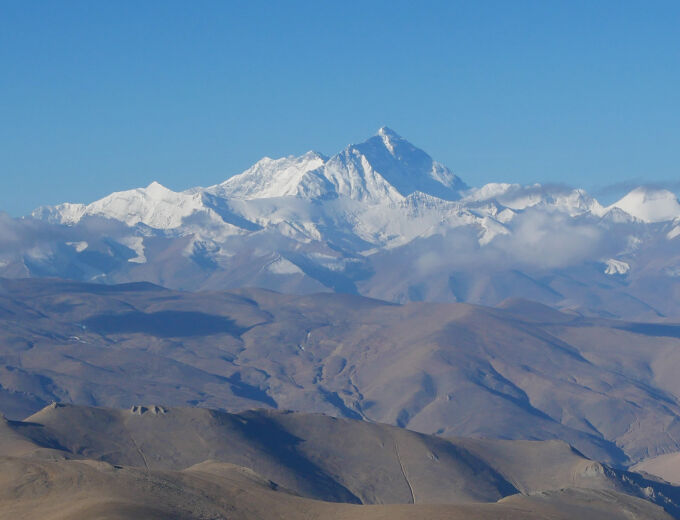 Everest National Park (Qomolangma National Nature Reserve) contains four of the six highest peaks in the world, and runs along the border with Nepal, from where most ascents begin. The Tibetan side commands views of Everest’s formidable North Face, which are utterly mesmerising even during the summer.

The approach to Rongbuk is surely one of the finest drives on the planet, snaking your way over passes and through valleys towards the mesmerising peaks. The views keep getting better and better until, upon arrival and on a clear day, you have a clear view from base camp to summit.

This delicious noodle soup is perfect fuel for a hike in the Himalayas!

The region holds over 1,000 monasteries aligned to different sects of Tibetan Buddhism

It's the world’s highest country, with an average elevation of 4,500m, and the air has 40% less O2 than average

From the eerie screes of Qomolangma National Park to the gleaming spire of Everest, Tibet is a feast for the eyes

Tibet runs on Buddhism, and even the most hardened athiests grow humble at the sight of those mountains

Even though the world's most famous exile doesn't live in Tibet, he still holds huge influence

All those winding mountain passes mean only one thing... this is an incredible place for a drive!

These circular pilgrimage routes are taken around natural and man-made sacred sites, as a form of devotion 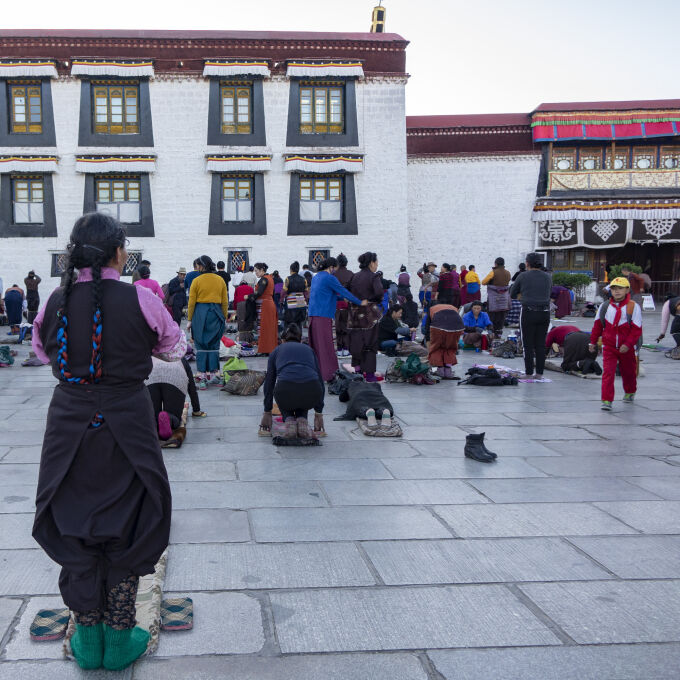 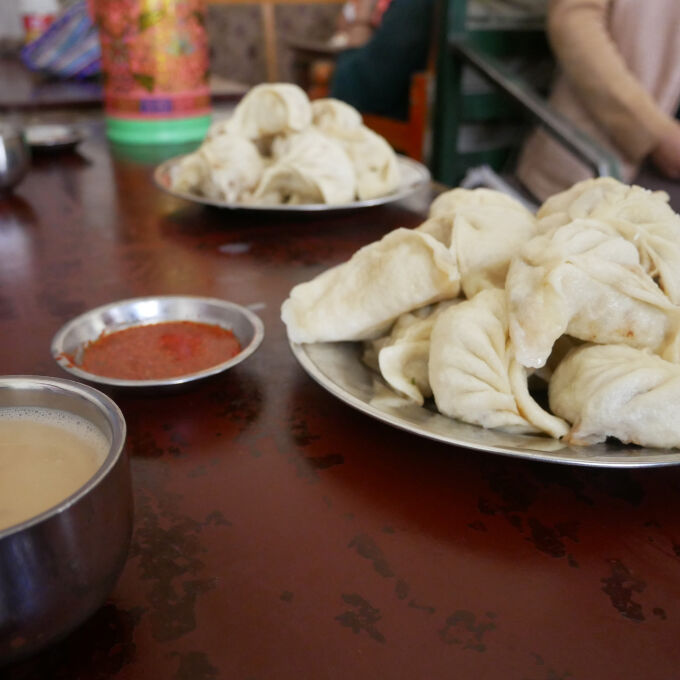 Stories from our latest Tibet blog