The sweeping landscape around the ancient city of Bagan is filled with over 2,500 temples, monasteries and pagodas - no wonder it's been designated a UNESCO World Heritage Site. However narrowing the list of temples down to the most beautiful is a tall order! Here are a few tips for getting the best out of a temple tour, pinpointing those stunning stand-out examples, and making sure you don’t get ‘templed out’... 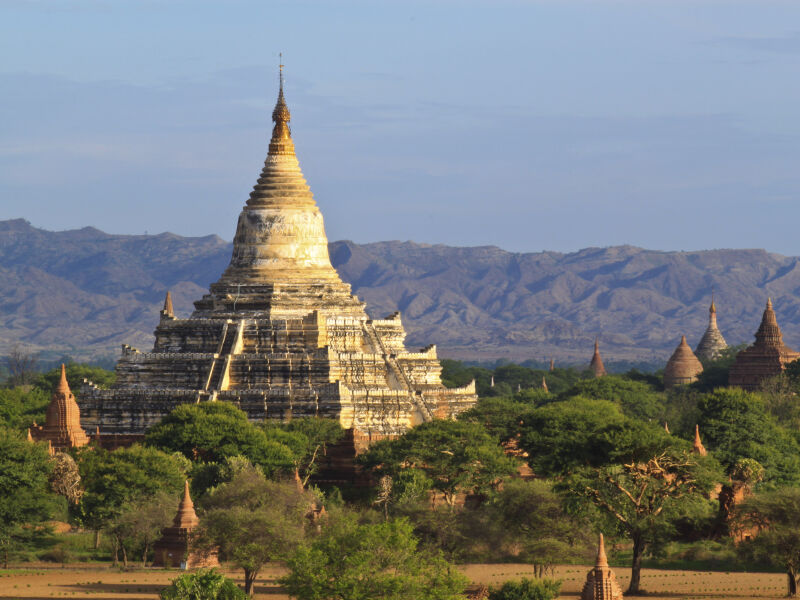 Shwesandaw Pagoda is a study in visual delight, and displays the fundamental design of many of Bagan’s Indian-influenced temples; its spires reach towards the sky, symbolising Buddhist transcendence. At over 320 feet tall, it is one of the highest temples in Bagan and visible from across the wide landscape. Protected deep within the shrine are a few precious hairs of Gautama Buddha, while the terraces were once decorated with images of the Hindu deity Ganesha, displaying an eclectic mixture of pre-Buddhist and Buddhist traditions from a time when Myanmar was in transition between the two. Shwezigon Pagoda is undoubtedly the glitziest of the Bagan region’s temples, its dazzling golden spire rising bulbously from Nyaung-U’s streets. One of the area’s oldest temples, built during the 11th century, it has been immaculately maintained (and restored following earthquake damage) and contains bone and tooth relics of Gautama Buddha. A little cousin, visually, of Yangon’s eye-popping Shwedagon Pagoda (and almost certainly less crowded), if bling is your thing, this beautiful monument is not to be missed. 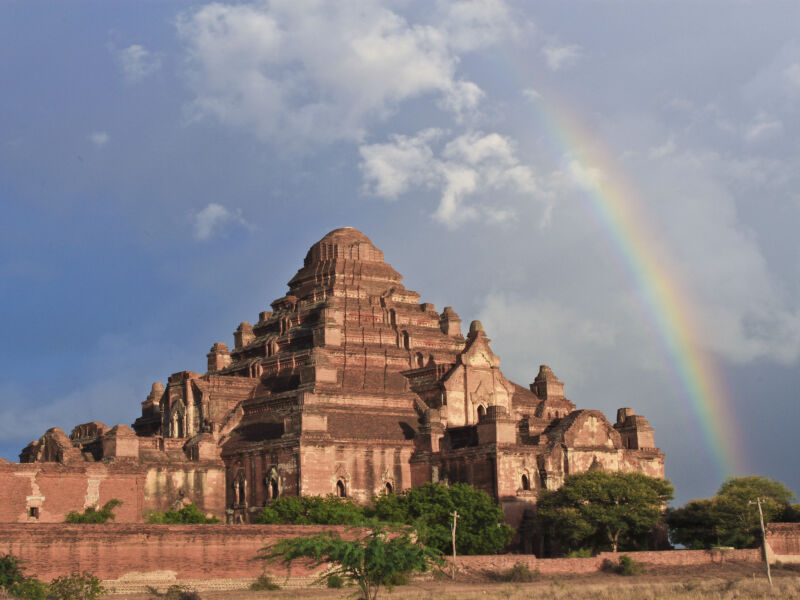 Dhammayangyi Temple is Bagan’s largest temple, its imposing stepped stupa rising pyramid-like towards the sky. The weathered walls of this 12th century behemoth tell a tale of endurance; of surviving through the centuries and still standing strong. The temple was never completed, and its inner walls are bricked up, both without documented reason, giving rise to legends of curses and karma, mostly focusing on the murderous King Narathu, who built the temple and was later murdered himself. Standing in Dhammayangyi’s shadow, the weight of its history is palpable. 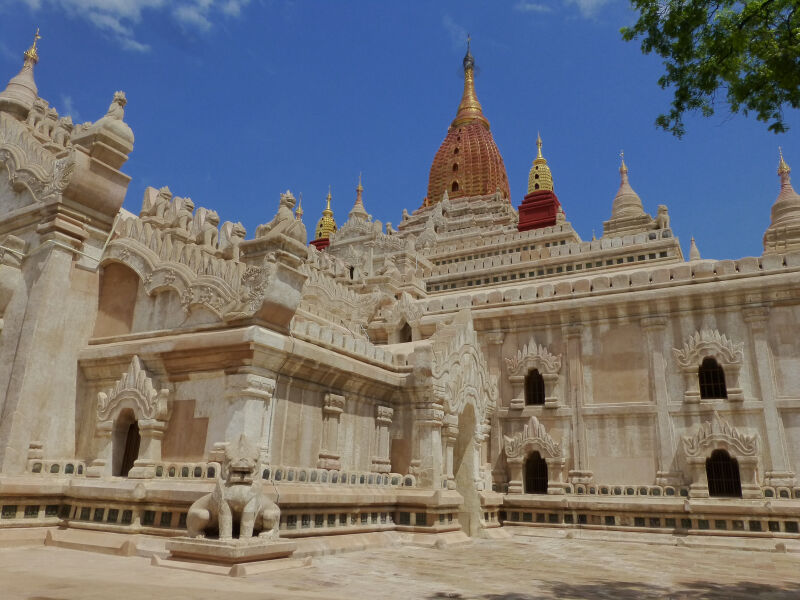 The renovation of the Ananda Temple after earthquake damage brought its pristine white walls back to life, and it remains one of the must-see temples in Bagan. Though a little weather tarnished, the frequently whitewashed walls still gleam out, enhanced by the golden spires which were gilded during the 1990s to celebrate the pagoda’s 900th anniversary. Within its simple corridor structure are hundreds of embellished carvings, elaborate frescos and four stunning, gold Buddha sculptural reliefs, one facing each main compass point, which you can lose many hours wandering between. 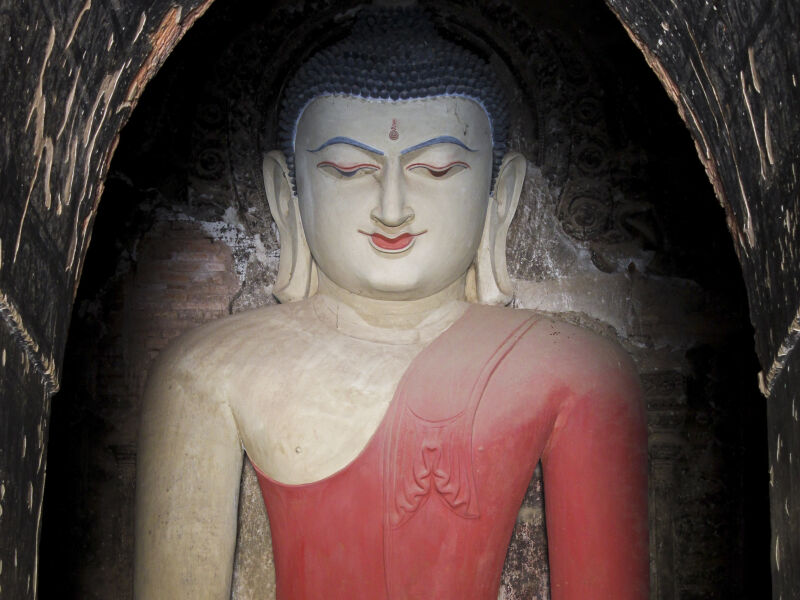 Away from the main clusters of pagodas, you’d be forgiven for walking past the unassuming Pahtothamya Temple without giving it a second glance. However, its modest walls hide a treasure of romance and beauty, and it is the very definition of not judging a book by its cover! Walk through the outer arches, allowing your eyes to adjust to the dim interior, to find a triptych of seated Buddha reliefs, in the ‘Calling Earth to Witness’ pose, often with floral offerings at their feet. The temple is skilfully designed to maximise the natural light, and for one week every year, the morning sun falls directly upon the heart of the largest Buddha.

Getting ‘landmarked out’ is a genuine phenomenon, where your senses become flooded with an overwhelming volume of churches or temples or caves, and you need a break! To avoid this happening in Bagan, and to make sure you visit the temples that will give you the biggest wow factor, we recommend getting the local lowdown on which temples are best to head for during your visit (some are better during the day, others at sunset etc), and perhaps starting your trip with a hot air balloon flight over Bagan. A balloon flight gives a unique, ‘top down’ perspective on these stunning pagodas, and allows you to pinpoint the ones you’d like to see closer when you’re back on the ground.

Can you climb Bagan's temples?

As of January 2018, most of Bagan’s pagodas can no longer be climbed. Instead visitors can gaze upon their full glory from the ground, or get sunset views across the spires from the Bagan Viewing Tower and lower viewing mounds.

There have been mixed reactions to this development, with some local businesses being concerned that it might reduce visitor numbers, and more than a little of the predictable (yet rather disappointing) indignation from travellers who had previously climbed the pagodas, upon being told they can’t. However, the move stems from a genuine need to preserve these fragile structures from further damage, and to avoid injury to those that do. It wasn’t unusual for bits of the ancient structures to crumble under the strain of hundreds of visitors during high season, sometimes causing injury to climbers.

Though some pagodas might seem to be open, as there’s no fence at ground level, the viewing platforms at the top are almost always fenced off, and visitors should take this as a signal to respectfully keep off the entire structure and enjoy its beauty from a little further back.

When to visit Bagan, Myanmar

Bagan is stunning all year round, especially from November to February when, as throughout most of Myanmar, you can enjoy the warmest, driest days, ideal for exploring the temples. Alternatively, in October - just after the rainy season - the landscape is at its greenest, the temples and pagodas look freshly washed, and there are fewer visitors than in high season, offering the chance for some particularly memorable moments. Read more in our Myanmar weather guides...