'I’ve been to India around half a dozen times now, starting over 25 years ago as a rather green backpacker completely overwhelmed by Delhi! It’s such a vast country that I’ve explored a different area with each visit, and had a totally fresh experience every time. And every homecoming has left me wanting to go back and see another region. So I was delighted at the opportunity to travel to Tamil Nadu — a huge state in India’s southern tip, that I had not previously visited — for the purpose of researching a new destination for Selective Asia!

A couple of years ago I travelled in Kerala, the other state that makes up southernmost India. Already pretty popular with international holidaymakers, Kerala is renowned for its rural backwaters, colonial architecture, and quiet tropical beaches. Tamil Nadu has all this and much more to offer the inquisitive visitor, yet seems to have far fewer non-Indian visitors.

Considered the Dravidian Hindu heartland, Tamil Nadu’s location protected it from the Moghul invaders whose cultural legacy is so visible in the north. While the Mughals were busy constructing the Taj Mahal and Agra Fort, the Tamils were left to develop their own religious and political institutions, and retain their ancient language, culture and artistic traditions. When Indians talk about the south, they usually mean Tamil Nadu.

My visit began in Trivandrum airport, which is just across the border in Kerala, and a two hour drive to my first accommodation in the Tamil Nadu countryside near Nagercoil. The Anantya Resort was lovingly built on the shores of Chittar Lake, by the family that has owned and managed Vaikundam Estate since 1957, having taken over this working rubber plantation from its British former owners.

Inspired by Laurie Baker and Geoffrey Bawa’s ideals of minimalism, eco-friendly design and authentic materials, the resort’s villas blend into their environment, thanks to their rustic finishes, local design, and salvaged items such as stonework, pillars and doors. The result is peaceful and relaxing, with a very welcoming atmosphere. My stay here coincided with Onam — the annual harvest festival — and the staff entertained us by dressing as tigers and hunters, performing a traditional dance along to drums. Guests joined in a traditional game where you try to smash a terracotta pot of water that’s suspended from a pole and dangled almost out of reach!

This part of Tamil Nadu was formerly Travancore, a kingdom in its own right, so has some different traditions to the rest of the state. During my stay I enjoyed amazing cuisine, from a traditional thali lunch eaten by hand, to beautifully presented fusion dishes. And what better way to get over jet lag than with a relaxing head and back massage in my resort’s Ayurvedic spa! 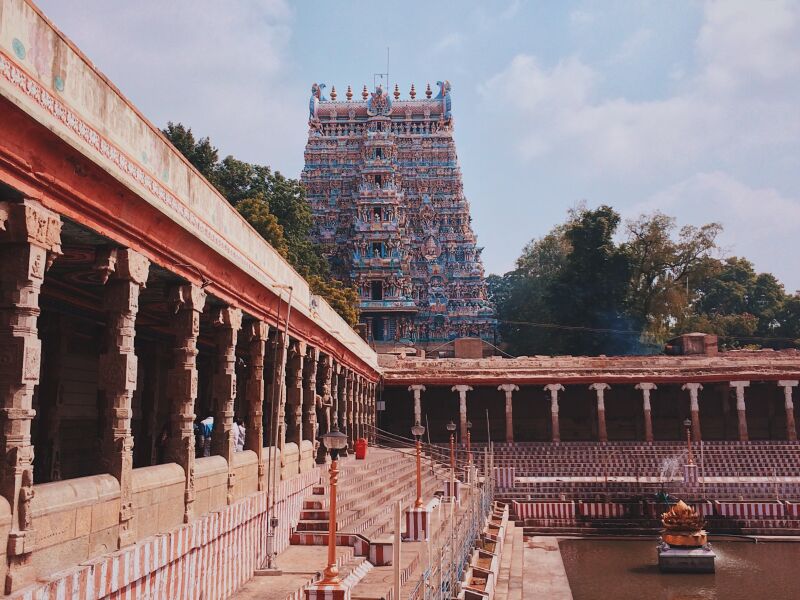 I travelled on to Madurai, one of the oldest cities in South Asia, and home to the vast Meenakshi Temple. If North India is famous for the Taj Mahal, then South India is best known for Meenakshi. Dedicated to the Goddess Meenakshi (an incarnation of Parvati) and her husband Shiva, the temple holds a ceremony every evening: Shiva’s image is carried by procession from his shrine to his wife’s, to spend the night, before being carried back in the morning. The temple’s huge gopurams — gateway towers crammed with brightly painted deities and mythological beings — dominate the old town skyline. I took a walking tour around Madurai’s streets, hearing stories of the legends and myths surrounding its history, which was a truly fascinating experience.

Journeying back into the countryside, I passed through an area known as Chettinad, which is famed for the elaborate mansions built by the Chettiars, a community of merchants and money-lenders who mostly accumulated their wealth during British rule, when trade routes opened up within the empire.

Some of these mansions have fallen into disrepair as businesses crashed after the Second World War, and families moved away, but a few are still kept on for big family celebrations, such as weddings. And a small number have been beautifully restored as heritage hotels where you can stay and soak up the grandeur of the past. Chettinad is also revered for its delicious cuisine, and many of the hotels offer a chance to try your hand at cooking some traditional dishes… or you could just let the chefs do their thing, while you enjoy eating! 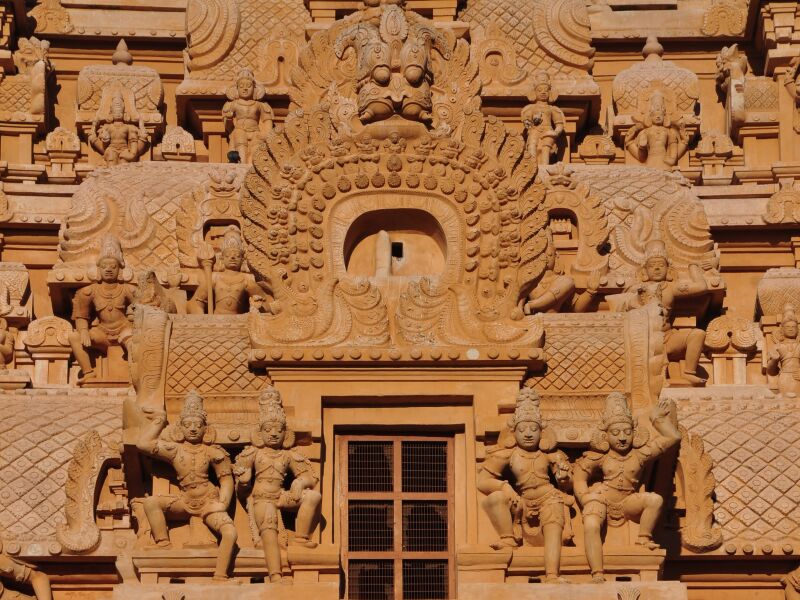 Next stop was Thanjavur, perhaps better known by its former name of Tanjore. Capital of the Chola Kingdom for over 400 years, the town contains nearly 100 temples. The most impressive, aptly known as ‘Big Temple’, is Brihadishwara, which dates back to the early 11th century. Quite rightly UNESCO listed, this huge temple complex is beautifully carved in granite, and a striking example of Chola architecture. Passing through to the main shrine, with its Shiva lingam, and receiving a blessing from the priest was a truly spiritual experience.

As well as its historical structures, Tanjore is also famous for being the birthplace of Bharatanatyam dance, and during my stay at the stunning heritage property Svatma, I was lucky enough to see a performance. The control, balance and expressions of the dancers was awe-inspiring... even more so than Strictly! Whilst staying at Svatma, I also indulged in their ‘Sound Spa’. Now, I love a massage — but this was a very different experience, as I lay on a table which reverberated while different instruments and objects like shells were used to make different sounds. It was actually surprisingly relaxing. 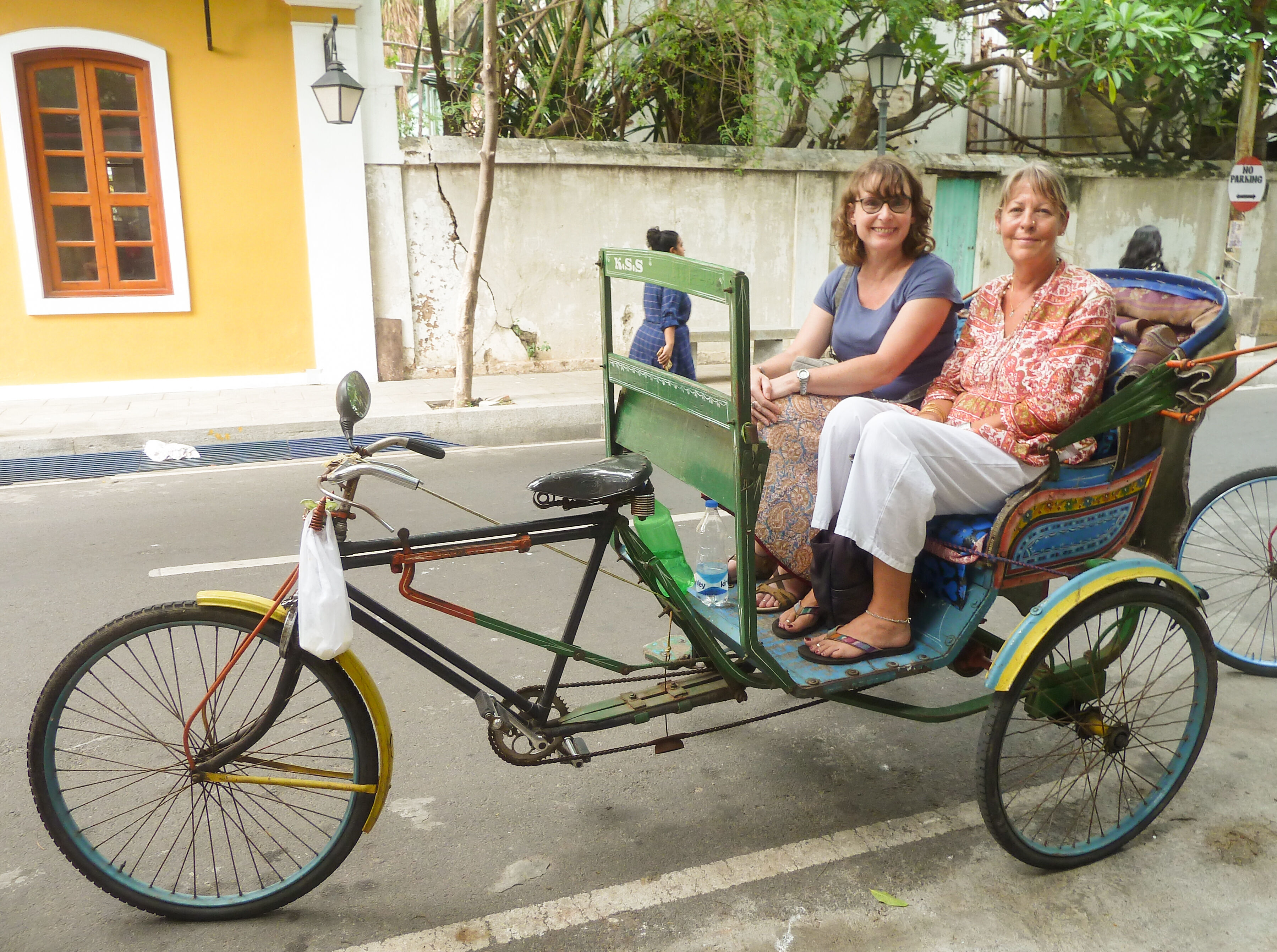 Making a stop en route at Pondicherry, I had a ride in a cycle rickshaw around the streets of this former French colony. The French quarter, an area known as ‘White Town’, still reflects its old colonial architecture, and is amazingly calm for India! I went to visit two different hotels here run by CGH Earth, who we love for their characterful properties and ethical practices. Palais de Mahe, located in ‘White Town’, is a heritage building with pillared colonnades and verandahs, high ceilings and stylish décor. In contrast but no less atmospheric, Maison Perumal sits in the Tamil quarter, and is a 130-year-old converted Chettiar mansion with a beautiful inner courtyard full of lush plants, and architecture and furnishings that reflect the Tamil culture. It’s a tough call to choose which I’d stay in! Continuing on, I spent the next couple of nights in Mamallapuram — of course they would go and change its name just as I’d learned how to pronounce Mahabalipuram! The Radisson Blu Resort Temple Bay covers quite an expanse beside the beach, and boasts a huge meandering outdoor pool. On my first night, they put on an extravagant show of traditional Tamil Nadu performance, including stilt dancers, musicians and contortionists! I also got the chance to try my hand at some local cookery whilst enjoying an evening at their wonderful seafood restaurant down by the beach.

A short journey from the resort is Mamallapuram old town, and the spectacularly set Shore Temple, along with a number of other UNESCO temples which are well worth dragging yourself away from the pool for! If you’re feeling energetic, it’s easy to cycle there. 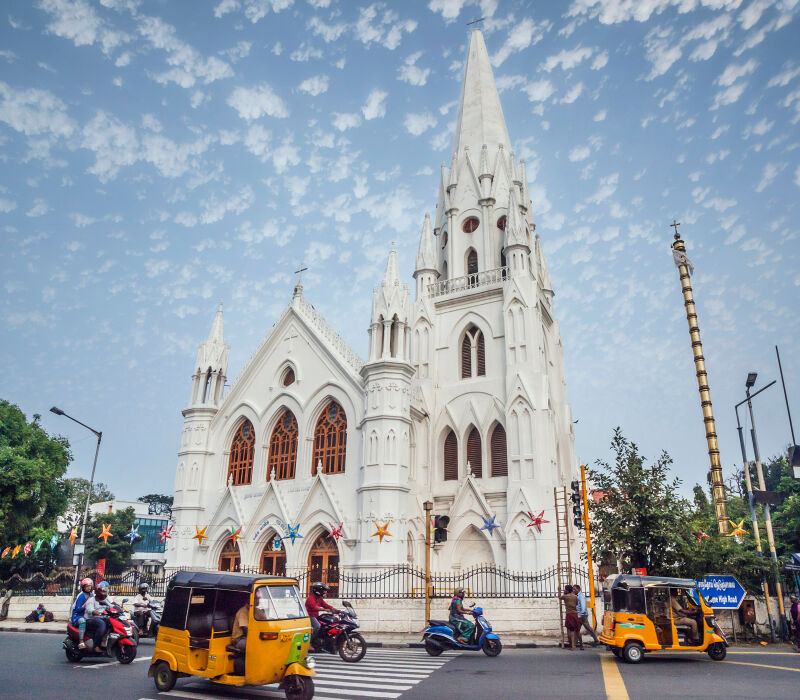 My final journey took me to Tamil Nadu’s state capital, Chennai. The city started life as a British military garrison and East India Company trading outpost known as Madras, and Chennai today is a sprawling urbanisation with quite distinct neighbourhoods. I joined a walking tour of the Mylapore district, an area occupied by the Portuguese in the 16th century. Sitting on the coast, the area was already an important port before their arrival, with records showing trade with the Greeks as far back as the 2nd century AD.

As part of the tour, I visited San Thome Cathedral, founded by the Portuguese and rebuilt by the British in the 19th century, and said to be the final resting place of St Thomas, one of the Apostles. I had previously assumed that Christianity had been introduced to the Indian subcontinent by colonial Europeans, so was surprised to learn that ‘Doubting Thomas’ introduced it long before this, when he spread the word in 52 AD. His tomb lays behind the cathedral, and pilgrims venture down there to see the tiny piece of bone which is all that remains of his, um, remains! Chennai also has a proliferation of Raj architecture to explore, including Fort St George — the first territory claimed by the British in India.

During the whole trip, I found the people so welcoming and inquisitive to know about me, and so very proud of their home, which made travelling there a delightful experience. For anyone with an interest in culture and the arts, or simply looking for a well-balanced destination with beach and rural areas, as well as ancient towns, I can’t recommend a visit to Tamil Nadu highly enough.'

Explore Tamil Nadu on our Tales of Tamil Nadu journey, or build it into your tailor-made India holiday.