August 12th is World Elephant Day, launched to raise awareness of the urgent plight of the world’s elephants. Why do we need a day dedicated to these mighty pachyderms? The facts and figures that prompted the introduction of World Elephant Day make for sombre reading.

At Selective Asia we are mindful of the impact that tourism can have on wildlife and the environment. Elephant tourism is an especially emotive subject. Getting up close to an Asian elephant is a bucket-list experience for many tourists, and sadly there are organisations throughout Asia that take advantage of this, being more concerned with chasing profit than animal welfare.

Due to increasing international awareness of the often cruel treatment of captive elephants, these ‘tourist attractions’ are gradually being named-and-shamed, and savvy travellers are only interested in visiting wholly responsible elephant projects. The Selective Asia team regularly inspect wildlife sanctuaries and camps on their travels, and we only support projects where we are entirely satisfied that animal welfare is a priority. Below are first-hand accounts of our experience at three of the good guys, beginning with my memorable elephant interaction in Myanmar. 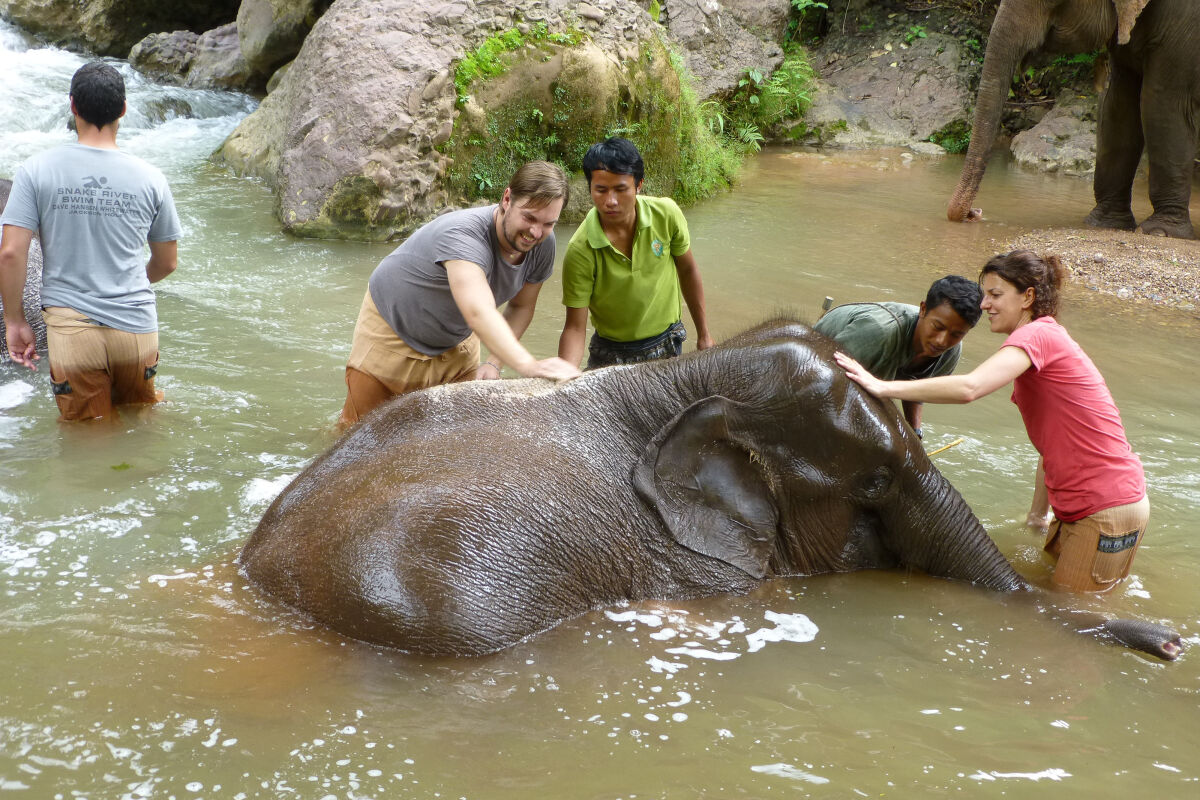 There I was, surrounded by bamboo forest near Kalaw in Myanmar, thigh-deep in brown river water, wearing borrowed Burmese fisherman’s trousers... scrubbing the head of a small Asian elephant who was submerged in the water beside me. It was one of life’s ‘pinch yourself’ moments!

This immersive experience is part of the visitor package at Green Hill Valley Elephant Camp, a family-run elephant sanctuary that is essentially a retirement camp for elephants who have been working in the region’s logging industry. Poaching and mistreatment of these mighty creatures is rife in Myanmar, an issue that prompted the launch of the Voices for Wildlife (formerly Voices for Momos campaign (in Myanmar, momos means elephants). The campaign has brought together conservation organisations including the WWF to call for an end to the country’s illegal wildlife trade, and educate the community in ways of conservation. An ethos echoed by the Green Hill Valley team where the focus is on improving elephant welfare standards and caring for these gentle giants in a stress-free environment - there’s no riding, chains or circus tricks.

During a recent inspection trip to Myanmar, I spent a memorable afternoon at this inspirational project, learning about their animal conservation and reforestation efforts, as well as the educational program they have funded in the nearby village, before meeting the stars of the sanctuary - the elephant residents. I must admit to feeling a little intimidated as I approached them – they are a lot bigger and bulkier when you get up close!

Rather hesitantly at first - animals can be unpredictable, after all - and under the watchful eyes of the mahouts, I stepped forward with my arm outstretched, holding a piece of ripe fruit. Having accepted my peace offering, my new-found friend allowed me to step closer and stroke his trunk, on the proviso that the ele-snacks kept coming. It was then bath time, which is how I came to be standing in the river with a scrubbing brush being careful to avoid wayward tusks, moving legs and floating dung! Well-fed and scrubbed behind the (large) ears, the elephants trundled off into the forest, free to roam until breakfast time, a world away from their previous working life lugging timber. 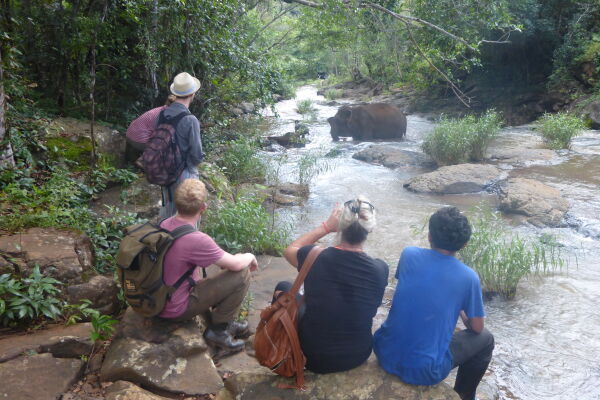 Cambodia’s Elephant Valley Project was set up in 2006 with a very simple goal; to ‘let elephants just be elephants’. This 1,500 hectare sanctuary offers 10 former working elephants a place to rest and ultimately retire, while also providing employment and support for their mahouts and the wider community. Visitors are only allowed to observe the elephants, and are not permitted to ride, wash, or otherwise interfere with their natural behaviour.

SA’s Anna visited the project in 2016. ‘For me, the most fascinating part of the experience was to hear the project’s staff describe the personalities and characteristics of each of their charges. During the afternoon I spent at Elephant Valley we observed two elephants, one of whom was called Easy Rider! At first, I thought I’d misheard, but apparently her name in Khmer means something along the lines of ‘easy to ride’ and one day a visitor heard this and came up with the nickname Easy Rider, which stuck. Easy Rider is generally to be found with her companion Gee Nowel (known as Genial for her relaxed and easy-going temperament). Project Manager Ben went as far as to describe them as the Laurel & Hardy of the elephant world!’

The Elephant Valley Project has been so successful in Cambodia that the team were inspired to open a second sanctuary  last year in Chiang Rai, northern Thailand. SA’s Natasha visited the project in June, and has not stopped talking about it since. ‘I’ve been to a number of elephant sanctuaries over the years, but Elephant Valley Thailand is the only place where I've actually heard the elephants making noises as if they were chatting to each other. It was a truly heart-warming moment.’ 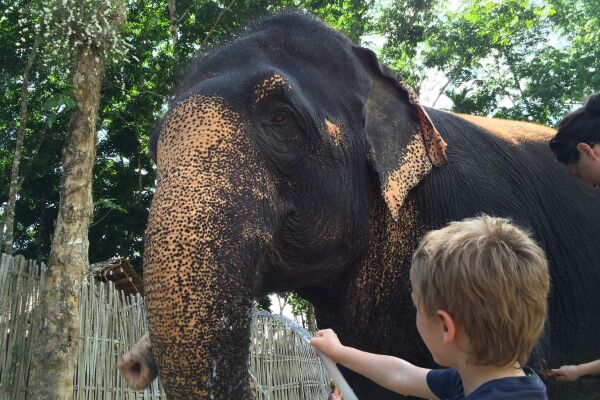 Further south in Thailand, hidden in the rainforest of the Khao Sok National Park yet easily reached from most southern Thai beach resorts, you’ll find Elephant Hills. Selective Asia is a huge fan of this tented jungle camp, and we’re not the only ones - the property has won countless sustainable tourism awards for its work in elephant welfare, conservation of the environment, and community related projects.

Don’t be put off by the term ‘tented camp’! Accommodation is provided in the form of African style safari tents complete with proper beds, en-suite bathrooms and even electricity and wifi. However, Elephant Hills is much more than a jungle glamping experience: it’s currently home to twelve female Asian elephants, which guests have the opportunity to meet. In 2010, the property made the decision to stop elephant riding and introduced a more natural interactive experience. Much of the programme is spent observing the elephants as they splash around in the elephant mud pool, interact with each other and generally go about their elephant life. But the highlight for many guests is the opportunity to get up close to these mighty animals, scrub and wash them following their mud bath, and feed them.

SA’s Product Director Karl took his family to Elephant Hills. 'It’s every young kid’s dream: sleeping in a tent in the middle of the jungle with all those unidentifiable animal sounds.' But it was the camp’s resident pachyderms that stole the show for Karl’s two young sons. 'Previously, they had only seen elephants on TV and in a wildlife park, so to get seriously close to an elephant that was double their height and feed it was a mind-blowing experience. It also earned them significant kudos on their return to school!'