Whether you like to nibble a croissant, feast on a full English or guzzle down an espresso, breakfast time features of some of the globe’s most iconic cuisine. Here at Selective Asia, we all love a good breakfast and enjoy discovering how this quintessential morning routine differs in each new place we visit. We’ve picked out some of our favourite breakfasts from across Asia to inspire you to step away from the toaster and try something new. 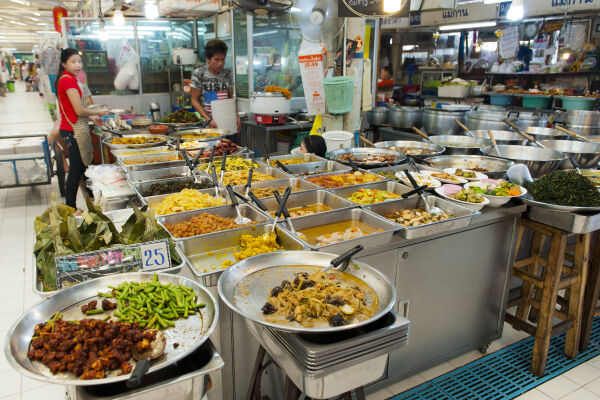 There isn’t a specific set of breakfast foods in Thailand, so if you wake craving something spicy there will be a vendor just around the corner ready to cook it up for you. One of our favourite dishes to start the day with is Pad Kra Pao Gai, which is chicken stir-fried with Holy basil (an ingredient which can be hard to get hold of outside of Asia, so a true ‘in situ’ treat.) One dish which does tend to be more popular in the mornings is jok, the unsweetened Thai variation of rice porridge. When making jok, the rice is boiled until it dissolves into a smooth consistency then topped with a few savoury morsels, such as fried eggs and pork meatballs, alongside fresh coriander and ginger. If only something sweet will hit the spot, try a bagful of pa thong ko. These rich nuggets of deep-fried dough are perfect for crunching with your morning cuppa or, as the locals do, dunking in custard.

Another of our breakfast favourites is the dim sum that Louise sampled in Penang. The cafes all over the Georgetown area serve this traditional ‘fast food’; steaming bamboo baskets full of dumplings which are wheeled between the tables on trolleys. You just point to whichever little bun takes your fancy as it goes by, and it will appear on your plate. Keep your fingers crossed that you like the filling though, as you probably won’t have time to ask what’s in it! The day’s selection might include shrimp dumplings, custard tarts, lotus-wrapped rice, barbequed pork rolls and many more; you just keep pointing and eating until you’re full. Nasi lemak, a Malaysian staple in the ‘rice and trimmings’ tradition, is gaining popularity as a healthy breakfast and is starting to appear on some super-hip menus around the world. A dome of coconut rice is surrounded with fresh cucumber, roasted peanuts, hard-boiled egg and fried anchovies, garnished with spicy sambal, then wrapped in a banana leaf for easy eating. 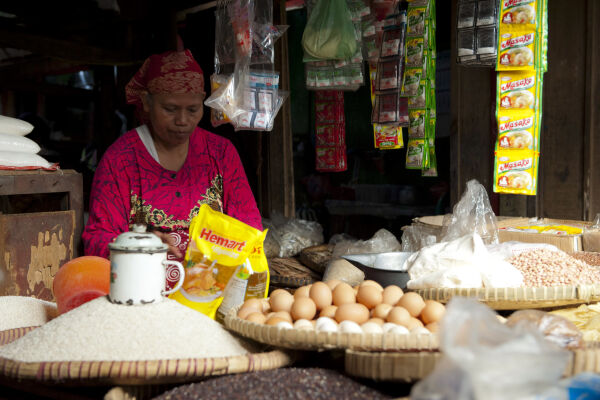 Indonesia’s has a wealth of micro-traditions, particularly when it comes to food. In Yogyakarta, for example, richly flavoured breads, such as bakpia pathok are the principal breakfast choice. There are versions stuffed with jam or chocolate, ones topped with nuts, and those with savoury fillings such as pork and bean, all freshly-baked each morning and bought from wandering vendors. One breakfast dish you’ll find anywhere in Indonesia is babur ayam: rice congee topped with shredded chicken, eggs and beans, which is sold from stalls on every street corner. This bolstering bowl of umami flavours and starchy richness is always finished off with an enormous stack of kerupuk crackers – the more the merrier! Tofu and tempeh are a popular duo in Indonesian breakfast cuisine, which is good news for vegetarian travellers. These soy-based treats are boiled up with coconut milk, tamarind, garlic and spices until they have absorbed all the flavours, and then deep fried to give the outside a satisfying crunch. 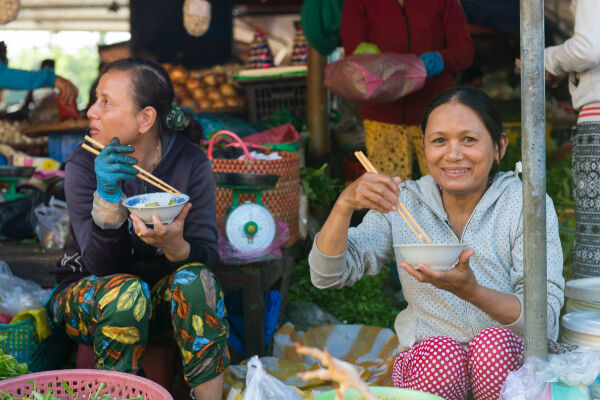 Along with a cup of the country’s famously strong coffee, the days in Vietnam traditionally begin with a steaming bowl of broth bursting with fresh herbs, noodles and thinly-sliced meat. The most well-known version of this dish is pho, but other similar dishes such as bun thit nuong and mien ga are often available too. From before dawn, the markets are full of the scent of the stock bubbling away in huge vats, intensifying as it cooks. You’ve got to get up early to try the best, as it sells out fast! If you don’t mind waiting around 6 hours for the stock to simmer, then you can make authentic pho at home and relive those crisp Hanoi mornings. Having cake for breakfast is heaven as far as we’re concerned, and in Vietnam this is how its done: a dizzying array of cakes and breads, or banh, are sold from the trays of wandering vendors and are perfect to grab if you’re in a hurry. If you’re not rushing, you can talk a leisurely walk through the markets sampling buns until you’re full. For something seriously filling, go for xoi: a bowl of sticky rice topped with anything from crispy fried onions to steamed chicken, roasted peanuts and even, for those with a sweet tooth, shredded coconut and sugar.

Borneo’s melting pot of cultural influences leads to a dizzying array of breakfast choices. Rice porridge is popular, as are those meaty, noodle and rice dishes which crop up throughout the region, but influences from India and Europe are thrown into the mix too. The bread-based breakfast options are many and various in Borneo, from flaky Indian roti to deep-fried char kwey dough strips, all topped with anything from lentil dal to chocolate spread. The smell of these baked goods wafting out from cafes as you wander through the towns is irresistibly tempting. Roti kawin is a king among comfort foods; thickly-sliced white bread is slathered with kaya (an eggy coconut jam) and sandwiched around slabs of cool butter, then enjoyed with a hot cup of frothy tea tarik. There’s always plenty of fresh fruit too, from bananas, papayas, mangos and pineapples to the famously pungent durian. This popular fruit, which looks like a spiky rugby ball, has such a strong and lingering odour that it’s often banned from hotels and public transport, but the taste of the creamy pulp inside is unlike anything else and worth trying at least once.

Due to the intense summer heat, the cooler morning hours are the busiest time in Myanmar, and breakfast is substantial enough to take you through the day. The most iconic breakfast dish is Mohinga; a soup so full of ingredients specific to Burmese cuisine that it is tricky to replicate elsewhere (though this recipe offers a few ideas). Sour, fermented rice noodles are added to fragrantly spiced soup along with banana stems for sweetness, toasted, ground rice for a savoury richness, and meaty chunks of river catfish. A heady mix of spices completes this unofficial national dish which is light, energising and really packs a punch! Burmese tea-shops are tranquil spaces to sit and watch the world go by as you soak up some typical Myanmar café culture. The traditional hot, sweet tea is often free with your breakfast and you can sometimes help yourself from a thermos on your table. A tempting assortment of fried samosas and e kyar kway (long doughnuts, sometimes known as youtiao) will be brought out for you to dip into your cup. 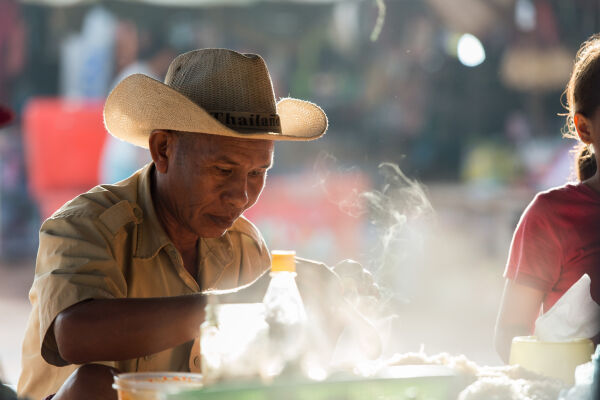 Cambodian cuisine sometimes has a reputation for being a little underwhelming, but what it might lack in variety is made up for with flavour. Arguably, the most popular Khmer breakfast dish is bai sach chrouk: a steaming bowl of rice topped with thinly-sliced, grilled pork, which provides all the carbs and protein needed for a hard day’s work. The salty richness of the charred pork is offset perfectly with a few sour pickles and some fiery chili paste, all served on a bed of sweet, starchy rice – yum. If you had to have one breakfast every day for the rest of your life, you could do a lot worse than this addictive combination. Jostling for first place as Cambodia’s favourite breakfast is nom banh chok: rice noodles with a spicy fish curry and as many different beans and greens as the chef can lay their hands on. It is wonderfully fresh and vibrant, in contrast to the unctuous comfort of the pork and rice, providing the perfect counterpoint for days when you need something with a bit of a zing. 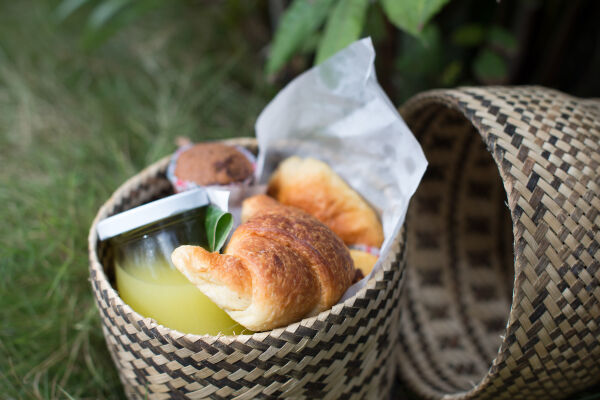 Laotian breakfast foods share many similarities to those of its neighbouring countries, but there is also a strong influence left over from French Colonial rule. This is most obvious in the typical Lao bread, khao jee, which is a baguette in all but name. This most essential of street foods is served Loa-style: stuffed with pork pate, sausage, cucumber, shredded carrot and radish, and topped with mayonnaise and hot chilli sauce. Classic French cuisine has really taken hold in Vientiane and there are French restaurants and cafes everywhere. Should you wish to, you can have croissants for breakfast which rival those found in France itself. If you’re searching for something a little more authentically ‘Laos’, the solid staple of steamed sticky rice is a universally available breakfast option. Served in bamboo baskets, you roll the rice between your hands and then dip the resultant balls into a sweet, spicy paste called jaew bong which will definitely fire up your engine to start the day! 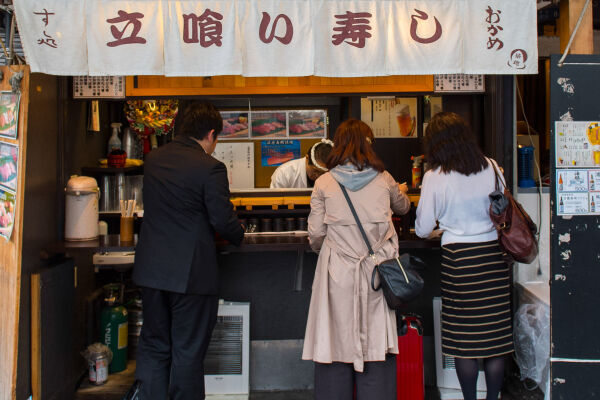 You can get pretty much any food that you want in Tokyo at any time of day, just as in most cosmopolitan cities around the world, but a traditional Japanese breakfast is a miniature feast for both the eyes and the taste buds. Presented as five or six delicately-portioned dishes, the individual components vary but it tends to follow a distinct style. There is nearly always some plain rice, perfect for lining an empty stomach, and a bowl of fortifying miso soup topped with tofu, seaweed or a variety of seasonal ingredients. There’s often a protein boost, such as some nato (fermented soy beans), an egg or some grilled fish. Fried and rich foods tend to be avoided at breakfast in Japan, and dishes are quite lightly seasoned. There are usually a couple of vegetable sides, maybe okra or mushrooms, a few sweet yet astringent, palate-cleansing pickles and some dried seaweed for a salty crunch. Japanese breakfasts are all about waking up the senses without overloading the body, offering the perfect balance between revitalising and filling, and are an ‘on trend’ breakfast in Europe. 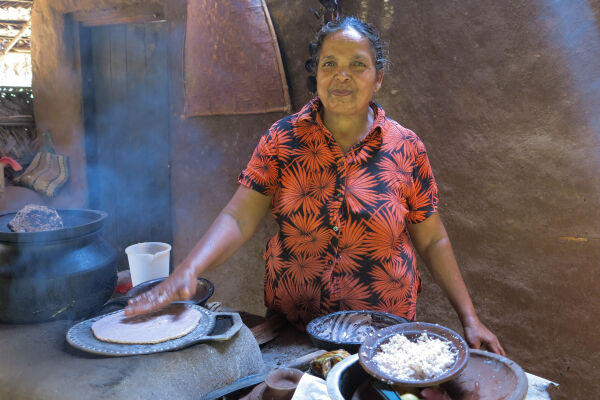 Any discussion of a good Sri Lankan breakfast starts with hoppers, the traditional batter-based bread. Appa hoppers are silky pancake bowls ready to fill with a fried egg or dollop of honey, while string hoppers serve as sponges for soaking up the comforting coconut gravy, kiri hodi. Another carbohydrate staple, kiribath (a milky rice pudding cake) is eaten on the first day of each month to bring good fortune. The cooled rice and coconut mixture is cut into diamond shapes and dipped into fiery sambal paste. On the other end of the spectrum, gotu kola kenda is a vividly green, thin porridge packed with herbs which looks super-healthy and tastes amazing. A small bowlful of this effective panacea, high in nutrients and antioxidants, is often eaten before other breakfast foods to awaken body and mind and start the day with a buzz. The main ingredient, the gotu kola itself (a plant native to much of South-East Asia and famed for its curative properties) is blended with ginger, garlic, red rice, lemon and coconut milk, then topped with jaggery sugar and served piping hot We couldn’t discuss the breakfasts of Asia without mentioning that Ceylon tea celebrates its 150th anniversary in Sri Lanka in 2017. This beverage, which has become the queen of breakfast tables all over the world, is served strong, spiced and sweet throughout the continent. Cheers!