'I admit I had reserved expectations about the art scene in Bangkok. In an Asian art world that is practically tripping over its own radical new contemporary art, Bangkok is remarkable for its relative artistic silence. Or could it be just quietly brewing up a storm? Even though Bangkok has a long way to go before it can compete with art capitals like Seoul or Hong Kong, it shouldn’t be overlooked. I had a fantastic unhurried day exploring the city’s galleries, and would thoroughly recommend an art based urban tour if you want something a little different. Here's how I spent my 24 hours in Bangkok’s art world...

Having picked up a street food breakfast on your way to the Siam area, head up to the top floor of the Bangkok Art and Culture Centre for one of Bangkok’s best coffees at the Gallery Drip Coffee. Walk via the Bangkok Scala Cinema to take a look at the city’s oldest cinema and its fine 1960s art deco architecture.

Start your art immersion at the Bangkok Art and Culture Centre, for an impressive introduction to the Thai art scene. 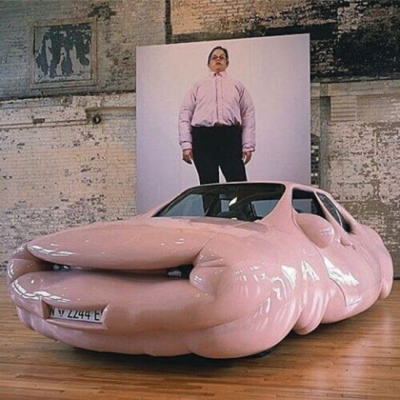 We left the fantastic riverside Shangri La Hotel, and after walking for a while up the bustling Chareon Krung Road in the soaring heat, we flagged down a tuk-tuk, haggled a bit on the price, then off we buzzed through the city’s colourful, eclectic streets.

Take a tuk-tuk in Delhi and you feel a similar adrenalin rush to jumping out of a plane – death may well be around the corner - but the great thing about tuk-tuks in Thailand is that you get all the fun without the butt clenching fear!

My first impression of the Centre is that, for a building that's seemingly crammed into a bonkers Skytrain + motorway + shopping centre spaghetti junction, it’s remarkably well designed and easy on the eye.

This probably has something to do with the 15 years it took for the Thai Artists’ Network, desperate for contemporary art to be given a platform, to get the stop/start project off the ground. If the outside is impressive, the inside is a real treat.

Architect Robert G. Boughey definitely had Frank Lloyd Wright’s Guggenheim Museum New York in mind when he put pen to paper, and there is a magnificent sense of scale to the cylindrical six floor atrium. We took the escalator to the very top to find a breathtaking Erwin Wurm exhibition, which although conceptual, felt warm, inclusive and witty. Erwin Wurm, who is an Austrian artist, is a brilliant, brave and forward-thinking choice for a state sponsored gallery, and the show was intelligently curated, making use of the huge, naturally lit circular space.

As we spiralled our way down the building, the walls were lined with thousands of the visitors’ Instagram images relating to the late King Bhumibol Adulyadej. It seems that with the nation in mourning, art relating to the King is ubiquitous in Bangkok, including at the super swanky Siam Discovery shopping centre next door, which hosted a vast interactive LED portrait of the King that responded to the viewer’s presence.

A short walk from the Art & Culture Centre is the Galerie Adler, a contemporary gallery specialising in Asian pop art.

It's good fun and well worth the detour, if only because Siam Discovery shopping mall is classy, extremely well designed and full of great eateries. 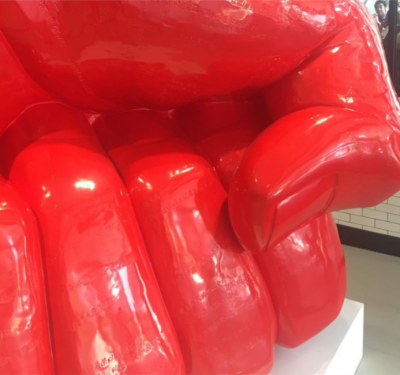 The highlights of the gallery were a giant fibreglass red fist smashing into the ground, by Chinese artist Liu Bolin, and a small sculpture of a man pushing an empty shopping cart by Manit Sriwanichpoom.

The latter, dressed in a bright pink suit, has become an iconic figure in Manit’s art; a man who appears in often violent scenes, dispassionately looking on like a Deity.

One painting that also really caught my eye was called In The Shadow II by Atassit Pokpong, who is considered one of the rising stars of Thailand’s contemporary art scene. It was a large scale portrait of a mysterious Asian woman.

Typical of his style, Pokpong often uses a contrast of pale colours for his subjects’ faces and dark for backgrounds or sheer fabric, with vivid highlights for the lips and hair, in this case gold, giving a striking effect.

Head over the road to Siam Square 1 and 2, an area popular with young locals and students from the nearby university, where you’ll find a plethora of independent boutique shops for mooching around. Head over to Som Tam Nua for traditional (ie., spicy!) Isaan food, from north-eastern Thailand. Pro tip: if you prefer your food not too spicy, make sure you ask for it ‘mai pet’.

Heading east on Rama 1 Road, we were fascinated by the brutalist concrete elevated Skytrain, and walked along the raised pedestrian concourse towards 100 Tonson Gallery, situated amongst the impressive embassies on Tonson Alley. 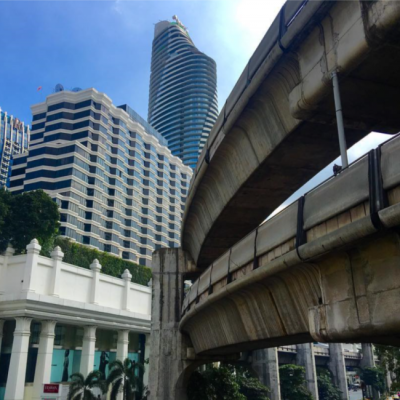 Once again, 100 Tonson Gallery did not disappoint. Yuree Kensaku, a Thai-Japanese artist, has taken three and a half months to create a multi-textured technicolour mural which fills the entire space.

Even though this was a painting, it had the effect of overloading the senses in a playful but profound way. Among her many exhibitions, Yuree Kensaku had also been a 2013 contributor the incredible BUKRUK Street Art Triennial in Bangkok, which most recently took place in Jan 2016.

From 100 Tonson Gallery, we walked through the tranquil Lumphini Park, hoping to catch a glimpse of its famous giant monitor lizards wandering around.

There used to be over 400 of the reptiles roaming the park, until September 2016, when authorities set about rehoming them in sanctuaries - because tourists were being scared out of their wits or crashing their bikes. We were rewarded for our diligence, and it was such a great feeling seeing this magnificent creature languidly crossing our path.

Continuing the theme of surprise, we walked to an unassuming road called Prasat Suk Alley, which looked quite dingy until we passed through the gates of YenakArt Villa. This stunning white modernist building looks as though it could have been designed by Mies van der Rohe. The expansive pillared space teamed with natural light, and was a perfect neutral environment for the eclectic, beautifully crafted sculptural works of Thai artist Sivadol Sitipol. Working in stone, marble, bronze and brass, Sitipol creates surreal objects (some nearly five metres tall) that at first seem familiar, as if liberated from an archeological dig, but prove to be just out of reach of explanation.

From here we grabbed a taxi back to the Shangri-La Hotel, ordered a long mojito and watched the beautiful sunset, recovering from the walking before heading out.

If you want to keep going into the evening, head from YenekArt Villa to the award-winning Issaya Siamese Club ($$$$) to experience a stunning contemporary Thai meal at one of the city’s best restaurants.

Alternatively, get a quick cab to Soi Suan Plu to enjoy the infamous Uncle John (279/2 Soi Suanplu 8, Bangkok. +66 81 373 3865). Chef Khun John, ex-head chef of one of the city’s five star hotels, returned to his roots with his own street food side kitchen, serving a creative menu featuring both French and Thai food.

For a low key atmosphere head to Junker and Bar for cocktails and craft beers. Or to experience a classic Bangkok haunt, try the Vertigo Moon Bar - the bar is well known, but the jaw-dropping rooftop views over the city will make you glad you came (smart casual dress code).

For an adventurous alternative, jump in a cab back towards Shangri La and seek out Jack’s Bar. It's hidden, ramshackle, but with the most idyllic location. This really is only for those feeling a little adventurous, though – a few rickety chairs and tables sit on an aging wooden pontoon, and the loos are less than salubrious. But there aren't many places in Bangkok where you can sit right over the river with an ice cold beer in hand...

Lee and Catherine stayed at the stunning Shangri-La Bangkok, but if you’re looking for a low-key yet stylish alternative, we recommend the Siam Heritage Hotel.