The anticipation of a community coming together, the warmth of lantern-light from food stalls and shrines, getting caught up in the party atmosphere: whenever you visit Japan, you can feel the buzz of shared celebrations. Alongside the major national holidays, such as those around Setsubun, cherry blossom season, and lunar new year, most towns and villages have unique matsuri festivals which highlight their history, heart and soul.

From the word matsuru, meaning ‘to enshrine’, matsuri began as ancient Shinto tributes to remember ancestors and honour deities. It was believed that the local kami spirits would literally descend to earth during the festivities. In some places, kami are still at the centre of the festival, and are paraded through the streets in portable shrines called a mikoshi. But many events have evolved to be more secular, and each place has distinct elements that reflect the traditions and character of their community.

When is the best time to experience matsuri?

Although there are more festivals during the summer months, when warmer weather and longer daylight hours add to the atmosphere, they do take place throughout the year, so you’re pretty much guaranteed to be able to find one. They can last anything from one day to nearly a week, and vary in scale from stylishly understated to high-energy flamboyance.

What to expect at a matsuri... 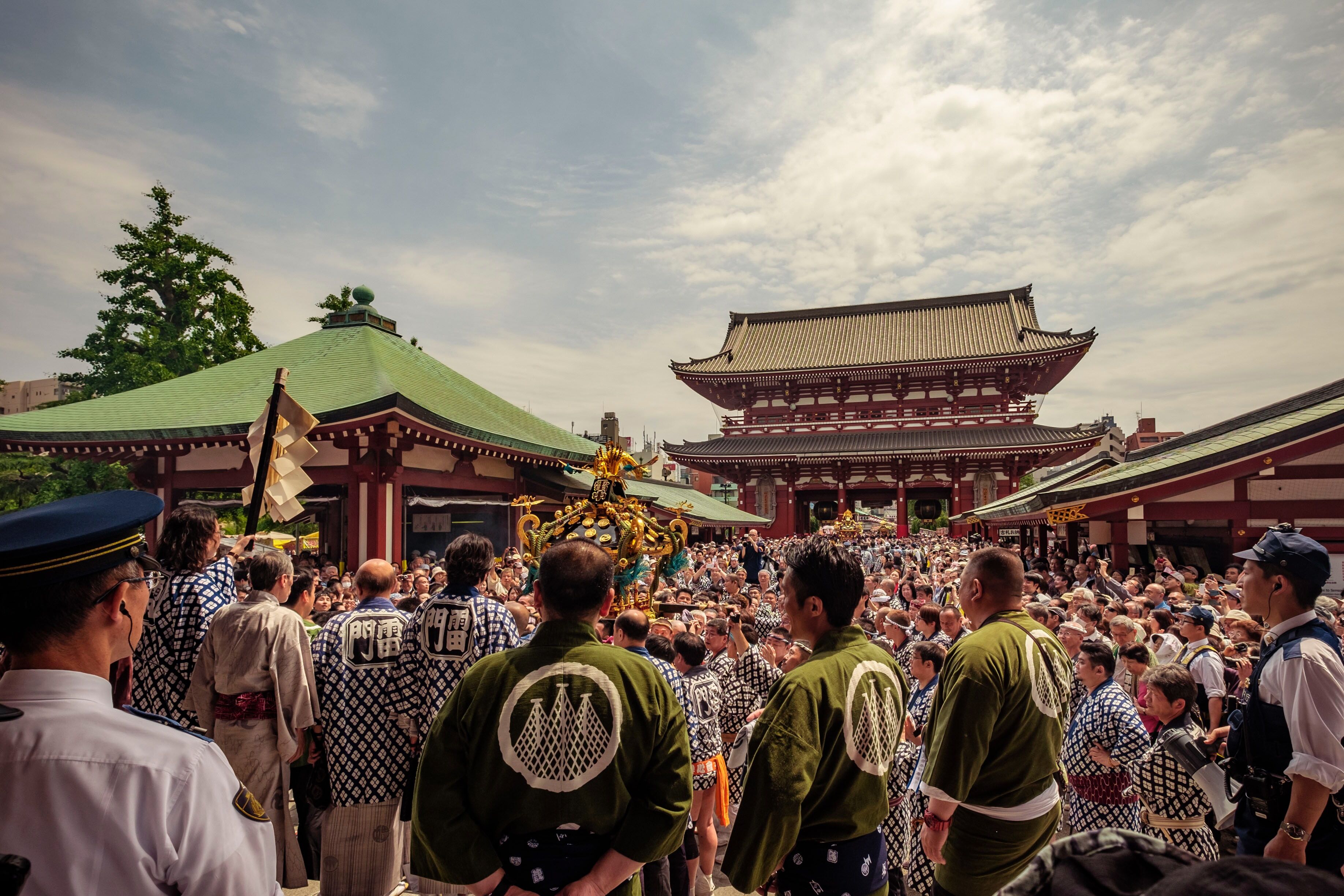 The festivities vary widely depending on where the party is, and who is throwing it. Many travellers will have heard of the more spectacular fiestas that culminate in huge parades, such as the Tenjin ‘Festival of the Gods’, Tokyo’s bi-annual Kanda matsuri extravaganza, and the month-long Gion Matsuri in Kyoto.

Since its inception in the 9th century, the Gion festival’s reputation has travelled well beyond Japan's borders. It now attracts thousands of visitors each July, who come to marvel at the giant parade floats, the dozens of intricately decorated yamahoko shrines and literal thousands of flickering lanterns - and to soak up the adrenalin-filled atmosphere, along with a fair bit of shochu!

Are matsuri always so full-on?

Not always, but often! Most matsuri are all about turning the ceremonial elements up to 11, whether with intricate formality, or simply by being extra loud and colourful. Though street-food isn’t usually as much of a ‘thing’ in Japan as in other parts of Asia, one translation of matsuri is ‘feast’, and the parade routes are peppered with stalls selling snacks to nibble on as the parade goes past, as well as vibrant souvenirs and party paraphernalia.

The snow and ice festivals during the winter months, such as those in Sapporo and Asahikawa, have a more chilled (sorry!) atmosphere as visitors wander between breathtaking snow and ice sculptures illuminated by colourful lights. Matsuri in smaller towns are often slightly lower key too, swapping the big city’s thronging streets for a village fete atmosphere, but in general everything is done at maximum size, volume and energy, with memorable individual variations.

Although the Mexican Dia del Muertos traditions have well and truly entered the worldwide consciousness, Obon, the Japanese equivalent, is long overdue its moment in the limelight. Every summer, hundreds of revellers celebrate the memory of their ancestors at obon matsuri across the country by placing lanterns on their family altar to light their loved ones’ way home.

There are bountiful offerings of food and drink, and the air is filled with music and drum beats as traditional bon odori dances welcome the spirits to earth. There is an electric sparkle in the air during these festivities, as the locals let their hair down and mingle in a more relaxed manner amid the shared joy and grief of commemorating lost relatives and friends. Everyone is included, even visitors just passing through, and at the end of the festival, multiple fires are lit to guide the spirits back.

If you’re in the right place at the right time, check out these matsuri which are a bit more unusual.

Wakakusa Yamayaki (January 26th 2019)
In a peaceful corner of Nara, the residents kick off their annual fireworks display by setting fire to the dry grass all over the mountain. Yes, they actually burn a mountain.

Saidaiji Eyo Hadaka matsuri (late February)
Held in multiple places throughout Japan, hadaka matsuri are rambunctious festivals designed to generate luck and happiness for its participants, through competing for good luck talismans - while naked, except for a loincloth. In February. Brrr.

Komaki Honen matsuri (March 15th every year)
Honen matsuri are harvest festivals, but the komaki celebrations have a little something extra. Alongside Shinto priests playing music and imparting blessings in the ceremonial parade, and plenty of free-flowing sake, is a 2.5 meter long wooden sculpture of a particularly distinctive part of the male anatomy! Well, it is a fertility festival.

Kuwana Ishidori matsuri (first Saturday in August)
Said to be the loudest festival in Japan, this parade brings together over 30 carts representing different areas within Kuwana, each carrying a large taiko drum. The areas bang out individual rhythms, coming together as the carts process towards Kasuga shrine in a deafening wall of sound.

The wilder and wackier aspects of these ancient festivals bring to mind familiar folk customs from around the world. They keep deep-seated customs alive and relevant, incorporating the old into the new as reminders of the power of story and celebration. Traditions that have passed out of the everyday experience are re-awakened and refreshed, allowing locals to take pride in their micro-identity culture, and the time to come together and celebrate a shared history. The element of ritual is comforting: playing out the same dance as generations before can anchor a community to its roots. And, of course, they’re a fantastic excuse for a party, which we all need once in a while.