12 ways to enjoy winter in Japan

Between November and February, large areas of Japan are covered with snow. Its big cities revel in festive glitz, and familiar sights and traditions take on a whole new character.

The country's highly-regarded ski resorts offer a Japanese twist on après-ski, with traditional inns and hot spring baths ideally suited to recuperating after time on the slopes. Skiing in Asia is a novelty, but a winter holiday in Japan is excellent for less sporty types, too, with unique winter wildlife, stunning frozen scenery and much cosy indoor culture to enjoy. 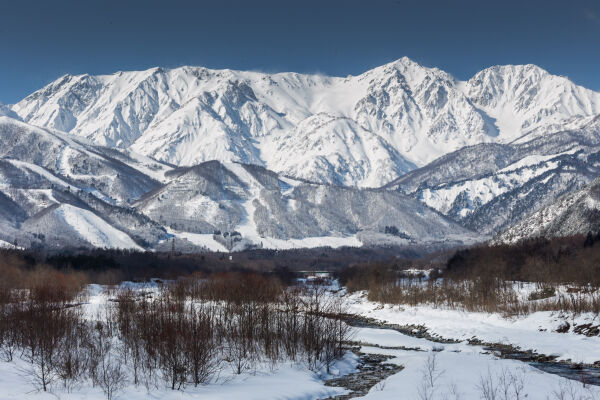 Niseko is Japan’s largest ski resort, and is becoming well known worldwide with good reason; there is always high-quality powder snow, the resort is easily navigated by foreign visitors, and it's one of the few winter sports destinations in Japan with off-piste and night-skiing options. Many of the hotels are so close to the slopes that you can practically roll out of bed onto a chairlift, and most, such as the Green Leaf Niseko Village, have natural onsens for relaxing those tired muscles at the end of the day. This is a great resort for serious skiers looking for something a bit different.

As the name suggests, this family-friendly ski resort combines extreme winter sports with traditional ryokan relaxation, and has a wide range of courses for different abilities. If you’re taking kids, there are several gentle nursery slopes, and a dedicated crèche and kids club so that you can enjoy the challenges higher up the mountain while your little ones have fun at the base. This resort is conveniently located on central Honshu, and ideal if you're travelling on to see more of Japan beyond the slopes. 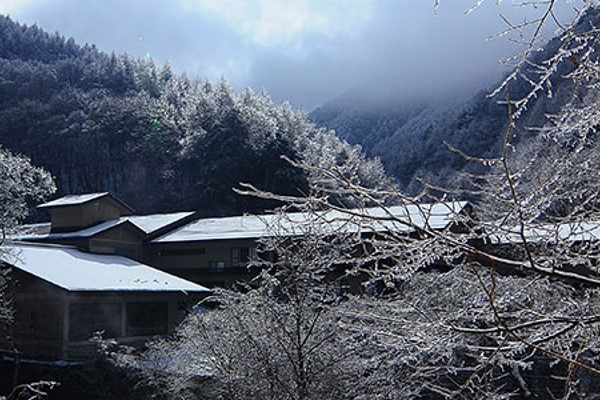 If you’re after a less mainstream experience with a bit of a wilderness feel, there are several spots in the Japanese Alps where you can get away from the crowds and enjoy the uncanny silence of pristine snow. Perhaps unsurprisingly, given the name of the region, there is a distinct ‘Swiss chalet’ vibe to many of the hotels (such as the deluxe Tobira Onsen Miyojinkan) but inside you will find the distinctly Japanese delights of a hot onsen and a fresh local feast. Some ryokan here even feature sunken fireplaces in the rooms for extra cosiness. 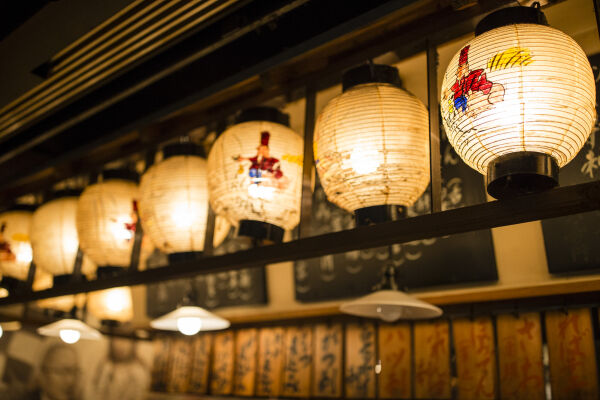 Being the capital of Hokkaido, Japan’s northernmost (and coldest) island, Sapporo really comes into its own during the winter. The fact that it once hosted the winter Olympics gives you an idea of the set-up – plenty of the white stuff, mountainous terrain, and an infrastructure designed to keep going through any weather. There is a Snow Festival each February, which sees the city’s parks transformed into galleries exhibiting enormous snow and ice sculptures, and between November and March you'll be treated to the Sapporo White Illuminations – a city-wide festival of lights and market stalls. Winter is crab season in Japan, and Nijo seafood market will have plenty of shellfish on offer, which you can wash down with a beer from Sapporo’s other famous industry – the Asahi breweries. 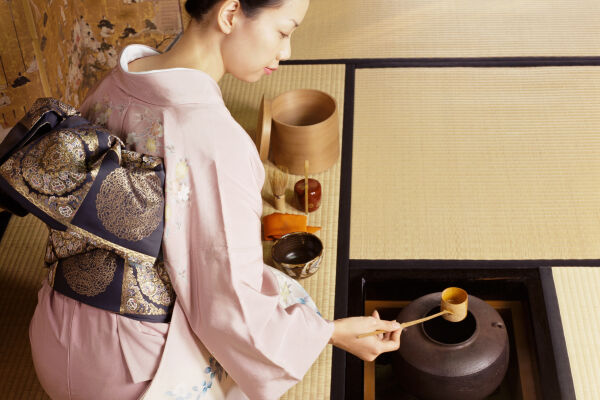 Though by no means specifically a winter destination, Kyoto has a very ‘indoorsy’, cosy side ideally suited to the months when being outdoors might be the last thing on your mind! If snuggling down in an up-market ryokan, sampling some of the city’s renowned restaurants, Christmas-shopping in craft markets and taking part in a private tea ceremony sounds like your cup of, um, tea, then Kyoto has plenty to enjoy. Many of the city’s temples put on seasonal illuminations which, along with the lights dusting of snow which sometimes falls here, make the streets look stunning. 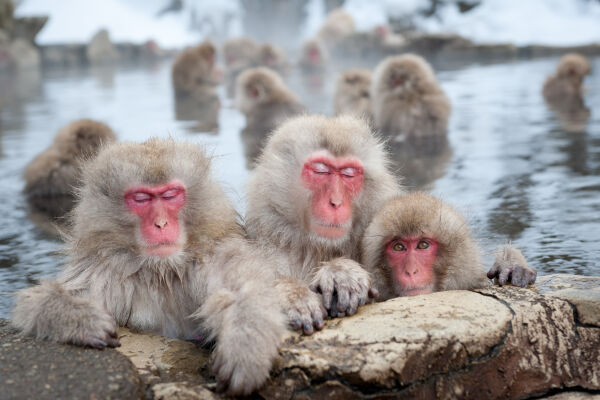 You may well have seen a few YouTube videos of Japanese snow-monkeys warming up in hot springs and thought that they looked cute, but perhaps a little staged? Well, as it turns out, this is genuine snow-monkey behavior, and can be seen up close at Jigokudani in the Joshinetsu Kogen National Park. The macaque monkeys love a hot bath during the winter as much as we do, and can be seen soaking in the natural springs and wandering about their rocky home from allocated viewing areas which keep the human presence as discrete as possible. 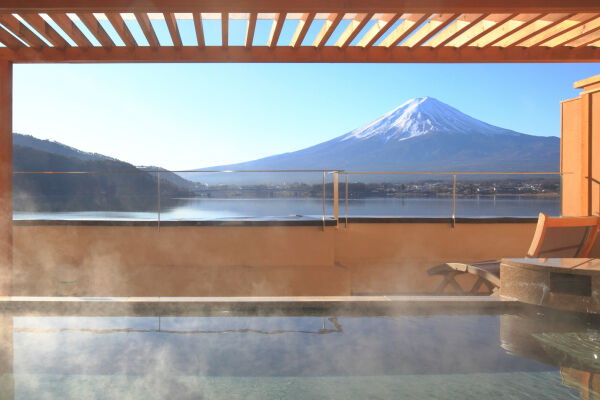 Mount Fuji is one of the most recognisable landmarks in Japan, and during the winter the summit is clearly visible without its summer cloud-cover. If you are keen enough to actually climb the mountain you will be able to witness Goraiko – the sun rising above the clouds from Mount Fuji - but this is only recommended for the seriously athletic with an accompanying guide, as it is a difficult climb during winter. Some of the best views of Mount Fuji can be had from nearby Hakone, which is well-known as a hot-spot for volcanic springs. The town has many high-quality ryokan all with slightly different USPs, such as rooftop baths (making the most of the clear views across the treetops), so it's an ideal place to do bit of ‘hotel-hopping’ and compare as many spas as possible.

If you are in Japan for New Year, you will be swept up in the phenomenon that is Hatsuhinode – staying awake to witness the first sunrise. This centuries-old tradition is extremely popular, and whether you choose to view the sunrise from Mount Fuji (see above), the roof-bar of a city skyscraper or with both feet on the ground, there are likely to be plenty of others there with you and a bit of a party atmosphere. If you are outdoors, we advise wrapping up warm and taking a flask of something hot to drink, as standing around at dawn at this time of year is likely to be very chilly!

The mysteriously-shaped ‘snow monsters’, or Juhyo, of Zao Onsen look like they have glided straight out of a Ghibli animation. These knobbly, white cones which seem to rise out of the snowdrifts in their hundreds are, in reality, a weather phenomenon caused by conifer forests, strong winds and freezing water vapour, and are so spectacular that they draw visitors to Zao just to see them. One way to get a good view of these extraordinary structures is from the ski-lifts and slopes, as Zao is first-and-foremost a world-class skiing and snowboarding resort for which the Juhyo make an eye-catching backdrop. 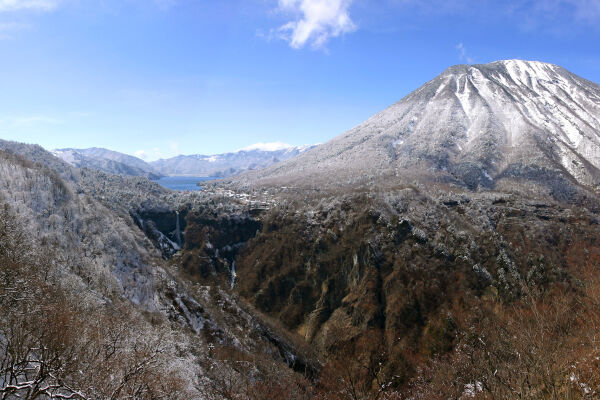 Hokkaido’s largest National Park is nothing short of stunning during the winter, when thick snow transforms the rocky terrain into a winter wonderland just begging to be explored. Cross-country skiing, snowshoeing, ropeway treks and seeking out frozen waterfalls are all popular activities, but many visitors simply wrap up warm, throw on a pair of sturdy boots and join an organized walk. There’s plenty of wildlife around too, including brown bears, which are definitely best avoided or at least viewed from a considerable distance, but the numerous deer are more photo-friendly. 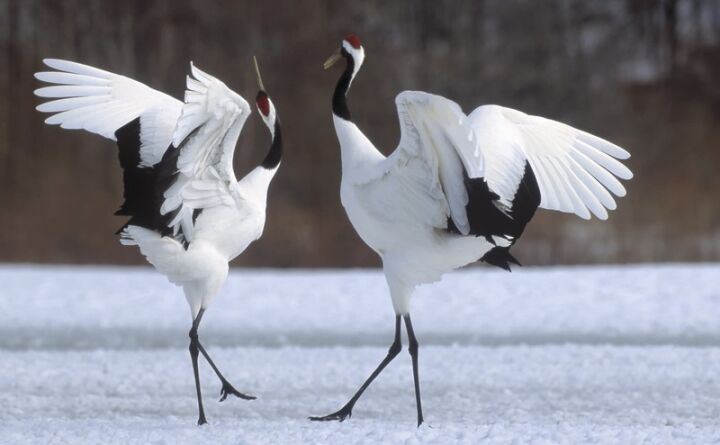 Thanks to continued conservation efforts, the iconic Red Crane (which was thought to be extinct until around 90 years ago) has made a recovery, and these birds are now thriving in the woodlands and marshes of Kushiro-shitsugen National Park. Though they can be seen all year round, during the winter they perform an extraordinary ‘dance’ in the snow, which is quite something to see. The cranes are one of many species which draw bird-watchers to the park and even during the winter the paths are easily navigated thanks to the relatively light snowfall in this area, making it more accessible to less-intrepid trekkers.

Tokyo is a top destination at any time of year, but during the winter it has a few extras to offer. The Christmas light displays (which, though not traditionally a Japanese celebration, have been embraced with gusto!), are particularly noteworthy around the station, there is a winter fireworks festival which as spectacular as the more well-known summer event, and for the young (and young at heart!) Tokyo Disneyland’s Christmas extravaganza is hard to top. For pure indulgence, gift-shopping in the city’s malls and markets and tea-drinking in cafés on Omotesando (known as Tokyo’s Champs Elysee), combined with a stay at the luxurious Park Hyatt hotel, makes a pre-Christmas mini-break to rival New York.

For more ideas on combining these experiences, take a look at our Japan journeys and have a chat with one of our experts, who can help you put together your perfect winter holiday to Japan.