Trek to the Tiger's Nest, Bhutan

It's all too easy to over-research an iconic destination, which can translate into an underwhelming feeling when you visit that place 'in real life’. But one iconic place that we can state with confidence will blow you away - however much research you’ve done - is Taktsang Monastery, aka the Tiger’s Nest, high in the mountains of Bhutan. Gemma visited on a research trip before we launched Bhutan as a destination.

‘I had to pinch myself as I sat cross-legged on the floor in a corner of the holiest site in Bhutan, the chanting of a dozen monks reverberating around the stone walled room that was lit with traditional butter lamps. That feeling will stay with me for life, and it’s these memorable first-hand experiences that just can’t be matched by flicking through guide books and websites (even the well-written & inspiring www.selectiveasia.com!).

Legend has it that Guru Rinpoche, founder of Buddhism in Bhutan, flew from the east of the kingdom on the back of a tigress and meditated in a cave at this site, 3,200 metres high on the side of a mountain, for three years, three months, three weeks, and three days. The Taktsang monastery, which fittingly translates as ‘Tigers Nest’, was built in the late 1600’s to mark this auspicious location and has become a popular pilgrimage spot. Sadly, flying tigers are hard to come by and the only way to access Taktsang these days involves a six hour round trip journey on foot.

After a hearty breakfast, armed with wooden walking staffs, we spun a few prayer wheels and set off from the car park, which was a hub of human and equine activity (it’s possible to travel the initial section of track on horseback). Stepping out from the tall pine and cypress trees that surround the drop off point we caught our first glimpse of Taktsang: a mere white dot clinging to the sheer rock face, ethereally wrapped in cloud. It seemed a long way up and quite inaccessible: where’s a flying tigress when you need one? We followed the wide, soil trail through pine forest that cleared in places to offer enticing glimpses of Taktsang and over the valley below.

Sections of the track were steep and Tashi, our guide, encouraged us to walk slowly to acclimatise to the altitude, however, conveniently placed benches offered respite (and views) along the way. It took an hour to reach the cafe (at 2,940m) where we were rewarded with the best views of Taktsang so far, which we savoured over tea and biscuits. From this vantage point the monastery really does look perched precariously on a ledge of the opposite mountain. It’s an incredible feat of construction. According to Bhutanese tradition, the building materials were flown up to the cliff on the backs of khandroma (female spirits), who used their hair to secure the monastery to the mountain. 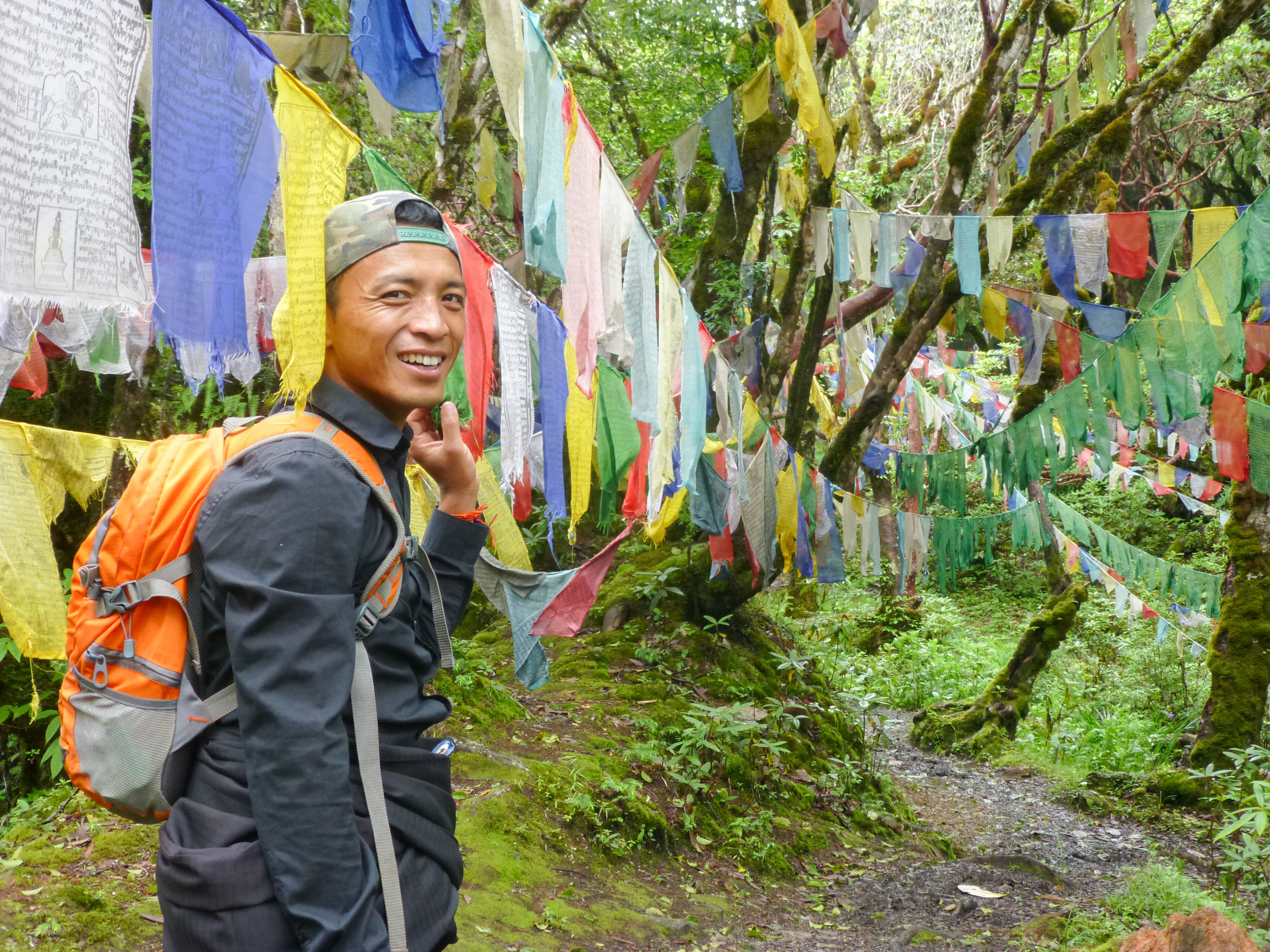 As we continued our journey upwards, the steep trail narrowed and a constant stream of prayer flags clung to trees lining the route. After around 40 minutes we were rewarded with breath-taking, uninterrupted views of Taktsang directly opposite, which required an obligatory group photo stop. We were now excitably close – just the small matter of a deep ravine separating us from the monastery. The last stage of the trek required a steep descent of around 300 steps, a short bridge crossing a sacred pool, followed by a final push up a flight of around 400 shallow steps delivering us to our holy destination. Our bags, cameras and phones were securely stored in a locker before we were permitted to enter the monastery complex. 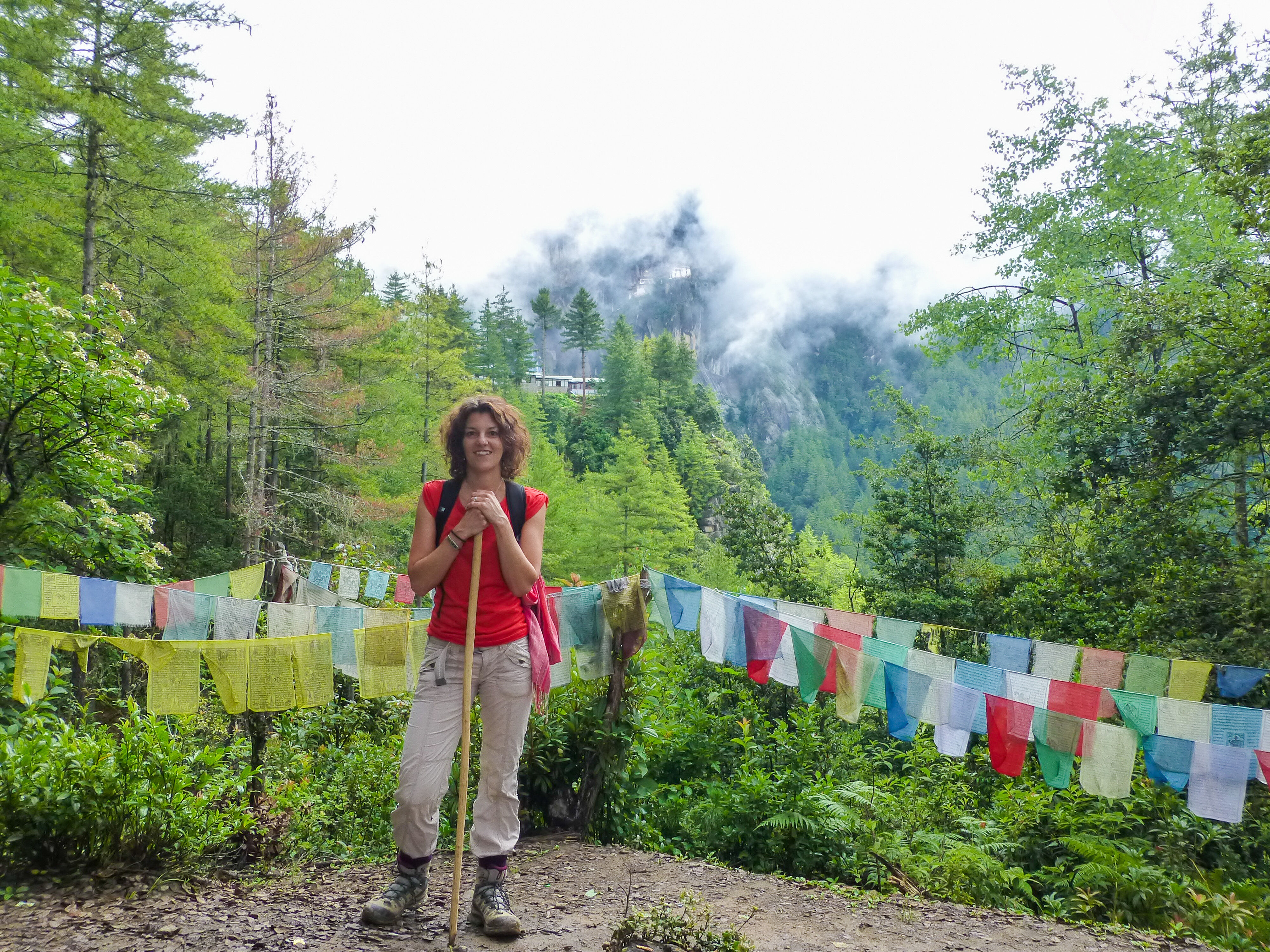 Taktsang’s interior is a warren of small, stone-walled rooms and meditation caves, housing ornate shrines and golden Buddha statues, atmospherically lit with candles and butter lamps. Colourful Buddhist murals adorn some of the walls and the smell of incense fills the air. Taktsang is a working monastery and you’ll see monks scurrying along the corridors. In one shrine we were blessed with holy water and invited to roll dice, which is a form of divination in Bhutan (even numbers are not good!). In another we were lucky enough to be the only visitors to observe a group of monks chanting, and we sat peacefully for a while savouring the moment. 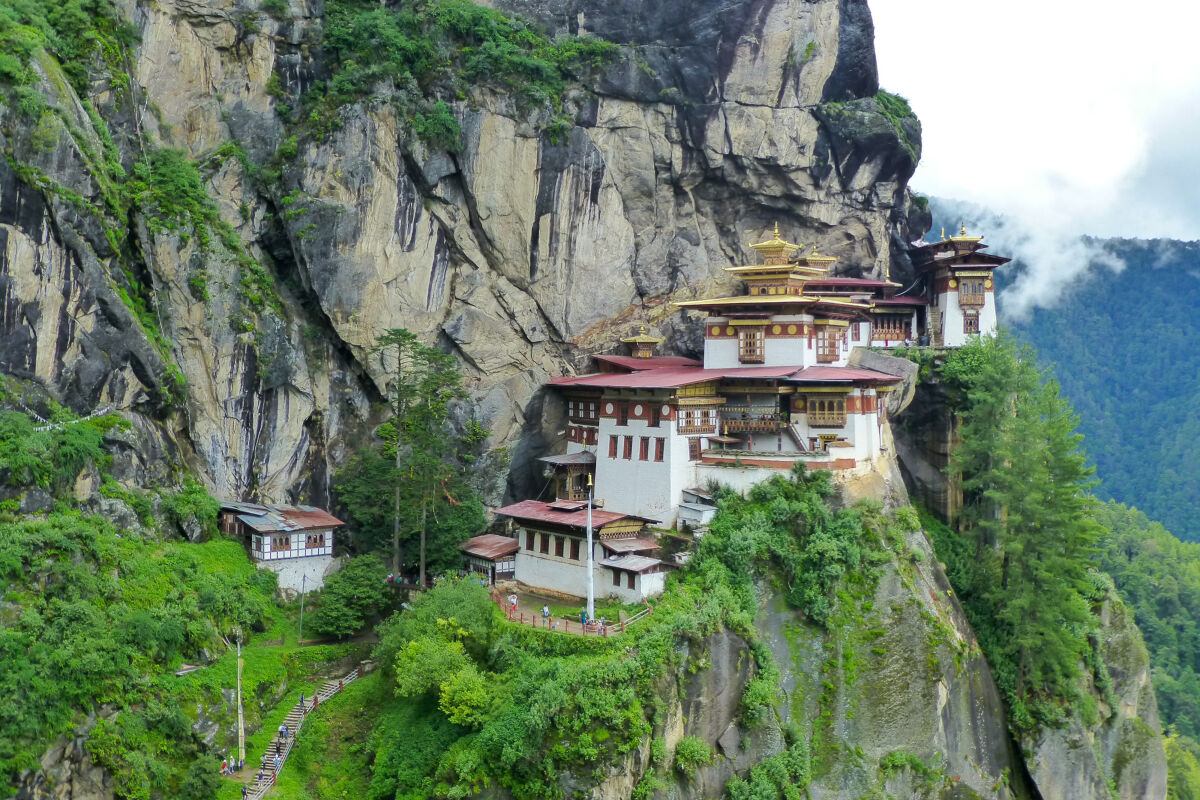 After an hour exploring, having been blessed at every opportunity and feeling suitably spiritual, it was time to trek back to base. We walked in a contemplative silence to the halfway café where we stopped for lunch and cast a final glance towards Taktsang before continuing to the car park where our driver was waiting. My feet and legs were aching, but I was happily weary and all of us were beaming. No trip to Bhutan is complete without a visit to Tiger’s Nest. The trek is well worth the effort and no guide book review will compare with the feeling of having experienced this special, sacred place first-hand.

I would recommend saving your Taktsang visit until the end of your Bhutan trip. This will give your body time to acclimatize to the altitude and lower oxygen levels, which by the time you reach the monastery at 3,200 metres are around just 70% of the oxygen levels at sea level. And of course, by visiting Taktsang at the end of your trip, you’ll be saving the best until last!

The best time of year to visit Taktsang is generally considered to be either in the spring, between March and April, or in the autumn from September to November. During these months the weather is typically dry, and temperatures are comfortable for walking. It’s worth bearing in mind that favourable weather conditions means visitor numbers to Taktsang – Bhutan’s most popular tourist site - will be high. I travelled in July and the trails were fairly quiet, however the summer months see the heaviest rainfall in Bhutan and we were extremely lucky that the day we trekked to Taktsang was predominantly dry.

You don’t need to be Edmund Hillary to trek to Taktsang, anyone of average fitness can complete the trek. Wear decent walking shoes, drink plenty of water and just take it slowly.