Unless you’re an enthusiastic speleologist, you might think of caves as prehistoric; places our distant ancestors used as shelter, that we now only visit to see primal cave paintings and impressive stalactites. But South-East Asia’s relationship with caves is far from extinct.

Many of the region's ancient cave temples are still active sacred sites, and its complex subterranean systems protected thousands of people during 20th century conflicts. Some are geological world-record holders, still being discovered by scientists. A number of them are also open to visitors, so we’ve selected the six most impressive that you can explore. A series of eerie limestone caverns filled to the roof with at least 8,000 images and statues of Buddha, this sacred site is currently believed to date back to the 1750s. The Buddhas represent an incredible range of workmanship and styles from all over Myanmar, having been donated by rich and poor pilgrims throughout the last 250 years.

To enter the caves, pilgrims must first bravely pass a Disney-worthy giant model spider with huge pointy teeth (a modern spin on a local legend). The dedicated then climb an intimidating flight of some 700 steps, which lead up the limestone ridge overlooking Pone Taloke Lake - a pilgrimage isn’t meant to be easy! The less able (and less devout) needn’t feel put off, however - there is also a lift.

Worth knowing: in February or March, depending on Myanmar's lunar calendar, Pindaya hosts a colourful pagoda festival that throngs with pilgrims. There are well-preserved stupas below the caves, and the paper umbrellas made here are particularly good. 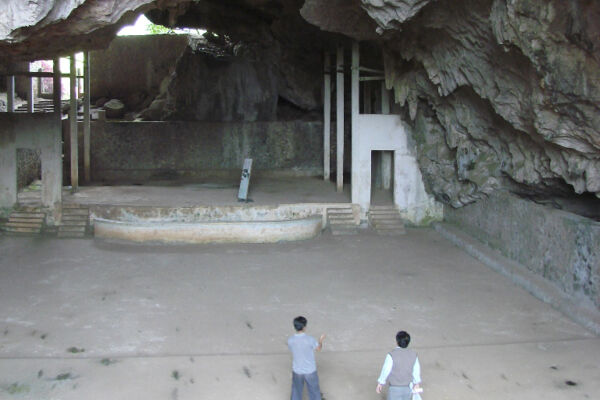 Close to the Laos side of the Vietnam border, about level with Mai Chau on the map, lies a vast honeycomb of limestone caves. Although not the most gorgeous set of caverns in our list, the Vieng Xai complex is impressive because it sheltered 20,000 people during nine years of near-constant bombing by the USA, while the latter tried to suppress Asian Communism during the 1960s.

Originally a Resistance stronghold against French Colonial authorities, the caves became a sanctuary for locals, as well as HQ to the Pathet Laos leaders who fought for independence throughout the 20th century.  Now the Resistance is in charge of the country, and the once-secret caves, which contained temples, hospitals and schools as well as military areas, have been opened for public viewings. Visually stunning, enormous, and buried beneath a beautiful UNESCO-protected landscape, Phong Nha is one of the jaw-droppers on our list. 26.5 miles long with countless grottoes and an underground river, much of Phong Nha is dangerous and off-limits to the public, but the first mile is accessible, some of it even by boat. This picturesque sacred cave is about 5 miles east of Kampot, on Cambodia's beautiful southern coast. There are a couple of hundred steps to climb to reach the cave entrance, so this is not for the faint-hearted or those with creaky knees.

The effort is worth it, though - it's easy to imagine why this became a sacred spot. An elephant-shaped stalactite guards the entrance, and two natural chimneys soar up from the inner chambers, opening to the skies. Within the atmospheric main cavern sits an 7th century brick temple, beautifully preserved due to being protected from the elements. Mountainous Gunung Mulu NP, a UNESCO World Heritage site in Malaysian Borneo, protects just over 200 sq miles of equatorial rainforest, along with thousands upon thousands of species, and several indigenous tribes. It's spectacular enough above ground, but far beneath the craggy limestone spires and leafy mulch lies the world's largest cave chamber - just one cavern in a network of caves, tunnels and subterranean rivers that spreads for hundreds of miles below the forest.

The area is hard to reach, but spectacular to explore, and adventure travel here is gaining ground - there are several basic chalets available throughout the park, with more luxurious accommodation to be found at the Mulu Marriott, just outside the park's boundary. This area, which spreads north from Kandy in central Sri Lanka, is worth visiting simply because it's so densely packed with fantastic cultural and historic sites - including five of the island's seven UNESCO World Heritage sites. Dambulla's caves (about 10 minutes drive from Dambulla town) are eye-opening for a number of reasons, the most immediately obvious being a huge golden Buddha statue and rather gaudy modern temple, which stand between you and the imposing temple rock that looms over the landscape.

The ancient, airy, elegant caves, tucked into the top of the rock, are decorated with many Buddha icons of various ages. Their walls and ceilings are covered in frescoes, painted in the 1700s, that illustrate Buddha's life, with a smattering of Hindu statues hinting at Sri Lanka's religious diversity.

Worth knowing: the view from the top is superb - bring your camera. For best lighting & cooler temperatures, visit at either end of the day. Being an easy day-trip from Luang Prabang, Pak Ou is a popular, well-known attraction, and is not 'impressive' per se, but its thousands of dusty little Buddha statues - deposited by pilgrims over several centuries - are lots of fun to discover by torchlight in the shallow riverside caves. You can reach Pak Ou by road, but the 1.5 - 2 hour boat trip along the Mekong is much more enjoyable, with longboats leaving Luang Prabang throughout the morning, starting at around 8.30am.

Worth knowing: the upper cave is reached via a long set of steps. At Laos New Year, pilgrims arrive to ritually bathe the Buddhas. Bring a torch, or hire one at the cave entrance.