Tasting unfamiliar food is one of our favourite aspects of travel - each newly-discovered dish becomes a lasting reminder of our adventures. However, the Selective Asia team have eaten a few things that might take some travellers out of their comfort zones! We're about to admit to some of the more interesting things that we’ve eaten in Asia - but only nine of our confessions are true. Can you spot the April Fool?

When she visits Bangkok, Louise likes to munch a few fried crickets with an ice cold beer - which is understandable, as their satisfying crunch does compare to pork scratchings! Markets throughout Thailand are peppered with stalls selling stir-fried crickets, beetles, grubs and worms, sometimes with added spices. Some of these creepy-crawlies do have a slightly bitter flavour, but many taste similar to prawns or nuts. Most of the Selective Asia team have tried some of these crispy critters at least once, and Claire casually mentioned that she's also eaten the odd scorpion-on-a-stick - but didn’t confirm whether she’d tried the live ones...

Suzie’s trip to Tokyo involved many new flavours, but the least familiar was raw chicken sashimi – the flesh and organs of a freshly slaughtered hen, served on a bowl of crushed ice... with a nice plum brandy. Suzie said the plum brandy may've helped her feel brave, but the sashimi turned out to be delicious! Many Westerners grew up with the fear of salmonella, so eating raw poultry can seem like a total no-no, but chefs in Japan prepare it safely by making sure the chickens are eaten very soon after slaughter. This particular restaurant belonged to a friend of a friend, and sourced birds from its own poultry farm. 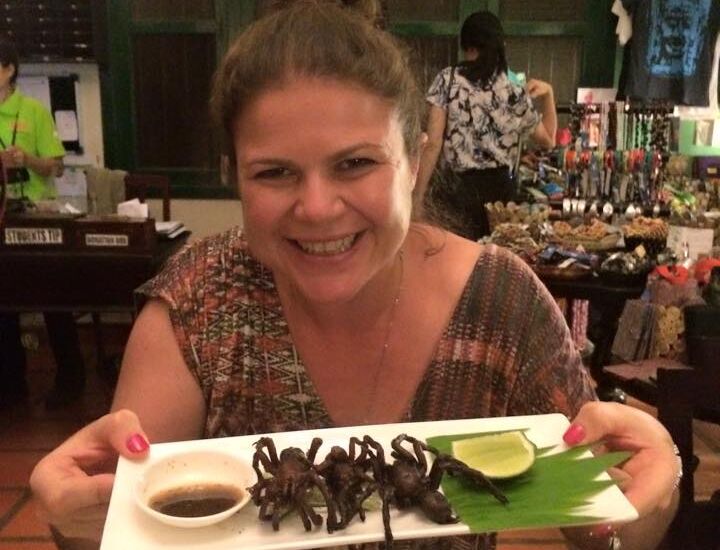 Gemma could only eat a leg because the body was ‘too squishy’... Louise says they’re one of her favourites... and Nick proudly boasts that he ate the whole thing. They are, of course, referring to their experiences with fried tarantulas, a Cambodian street food phenomenon that has its roots in the town of Skuon - known in the local dialect as ‘Spiderville’. This town became so overrun with these eight-legged, protein-packed beasties that, when there were food shortages, the locals decided to eat them! You can now buy fried tarantulas by the scoop from markets throughout Cambodia, where they are sometimes seasoned with salt and garlic. Their taste has been likened, rather predictably, to chicken, but with a softer (squishier?) texture...

Claire wasn’t quite sure what to expect when she ordered a chicken-neck curry on her trip to Laos, but was intrigued and decided to give it a whirl. In the UK we often use chicken bones in soup, giblets to enrich gravy and chicken livers in pate, but there are parts of the bird that we often overlook. In India and Laos, where meat can be expensive and scarce, chicken necks are a popular cut, as they are cheap and ‘soft boned’ so can be eaten whole, often flash-fried with onions, spices and tomatoes. The necks can be a little chewy, which may be an acquired taste, but Claire found them 'full of flavour'. 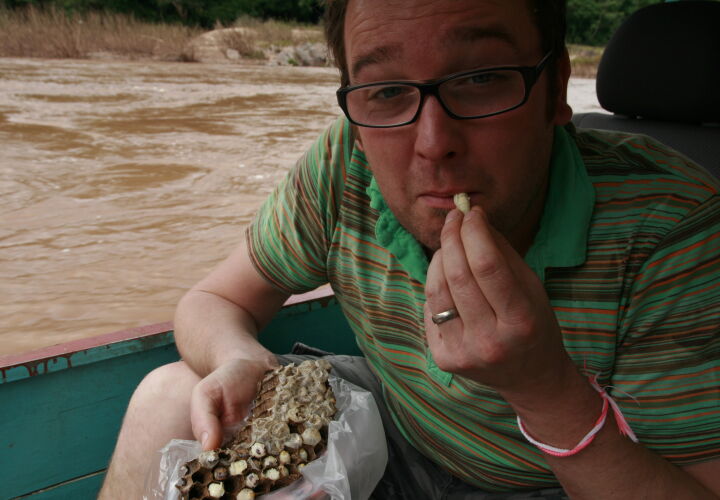 Just when we thought we were done with edible bugs, Karl tells us about the time he ate giant wasp larvae. He had stopped at a remote Laos village with a bit of a headache, and the larvae were offered up as an instant remedy. The sting of an Asian hornet can be fatal to humans, so eating them in their larval stage could be seen as something of a public service! Karl said the fully formed larvae tasted bitter, but the smaller ones were ‘melt in the mouth(ish)’. He hasn’t mentioned whether they cured his headache, though. Kate ate bee larvae in Cambodia - they were cooked in their own honeycomb, and she doesn't recommend them, ‘especially once they’d congealed’. Yum...

In a tiny karaoke bar on the outskirts of Siem Reap, Steven was offered a water monitor lizard stir-fry. He said it was ‘rather bony and chewy’... but not bad. These large, venomous lizards are common and a familiar sight throughout South-East Asia, their forked tongues giving them an ancient, dragon-like look. Although they mostly eat fish, rodents, birds and even small crocodiles, they have been known to steal chickens from local farms.

After his time spent camping with the Iban tribe in Borneo's rainforest, Simon definitely wins the office award for ‘Most Adventurous Eater’, but one of his less hair-raising experiences was tucking into barbequed rat in the Mekong Delta. The rats are cooked on skewers and sold from street vendors throughout Vietnam, and in restaurants, where they are more highly seasoned, and served with various sauces. These seldom-loved creatures have a reputation for being grimy, but this is really only true of city-dwelling rodents. Their country cousins (ie the ones that get eaten) have a very similar diet and environment to wild rabbits. According to some, rat meat takes the old ‘tastes-like’ cliché to a new level, and is actually better than chicken. 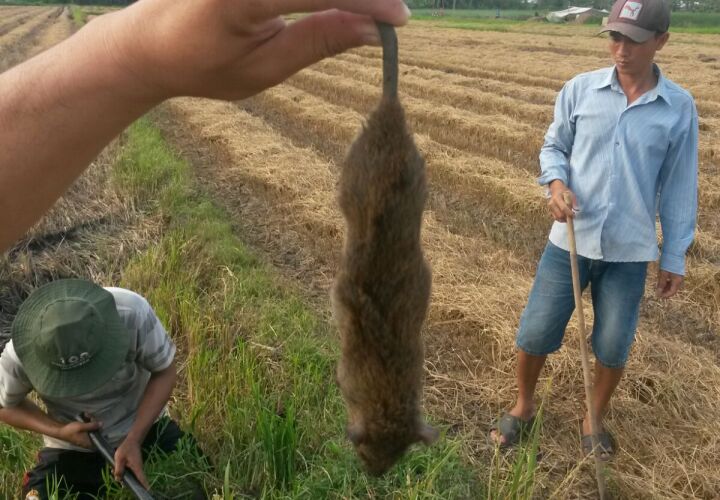 Having discovered that ortolans are simply small birds which are eaten roasted, Vincent was taken aback by the extraordinary ceremony with which they're prepared and devoured! The ortolans are fattened, drowned in Armagnac, roasted, plucked, and eaten whole - feet first - while the diner drapes their head and face with a napkin, to hide the sin of eating such beautiful creatures in such a decadent manner. Now illegal in France, the tradition dates from Roman times, and was introduced to Cambodia during French Colonial rule. Vincent says it was a once-in-a-lifetime experience, and a piece of food theatre that he’s unlikely to forget. And how did they taste? A bit fishy, apparently.

Another dish on Simon’s list was one that may be unusual to many Westerners, but is a popular comfort food in the Nyonya tradition of Singapore and Peninsular Malaysia. Perut ikan is a hearty curry made from pickled fish stomachs stewed in a warming broth with aubergine, pineapple, prawns and aromatic herbs. The preparation is a labour of love, and a good example of using the otherwise discarded parts of an animal. The stomachs are taken fresh from the fish, salted, then preserved in glass jars until they have fermented and can be added to the pot. Simon ate these in Vietnam and wasn’t too impressed, finding them a bit tough and rubbery. Perhaps he just had a bad batch, though, as it is one of the most requested dishes in Nyonya cuisine.

Last on our list is a somewhat cautionary tale - one of the Selective Asia team found themselves agreeing to eat the still-beating heart of a cobra in Vietnam. Consuming particular parts of dangerous animals in the hope of increasing virility occurs in many cultures; in this particular Vietnamese version, the live snake is sliced open and its beating heart is swallowed whole. Although snake meat is an authentic ingredient, eating the heart in this way is a modern practice, almost entirely for the tourist trade. As well as animal welfare controversies surrounding the practice, there are health implications in eating raw reptile meat, as some carry very harmful bacteria, so we can't recommend thisexperience!

Congratulations if you spotted that the Cambodian ortolans were our April Fool! Although Vincent didn’t eat them, and this dish is no longer served in France due to the rarity of the birds, it is genuinely how ortolans were traditionally prepared and eaten. However, although these birds are found in Cambodia, finding them on the menu there is an unlikely occurrence.